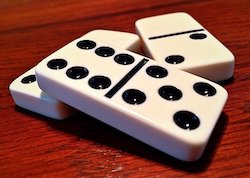 When you buy a set of 0-6 dominoes they often come in cardboard boxes - and those boxes sometimes don't last very long!
What if you were given lots of dominoes in a bag?
Before you started playing it might be a good idea to find out if you have a full set!
How would you go about it?
How could you be sure?

What if someone gave you some 0-9 dominoes?
How many do you think there would be in a full set?

If you do not have any dominoes, you might find our interactive Dominoes Environment useful.

You may like to try Amy's Dominoes as a follow-up to this task.

When we use structured apparatus such as Cuisenaire rods, dominoes, Numicom etc. we often assume that children understand more about the structure than perhaps they do. This activity encourages children to explore the structure in their own way - and you may be surprised at how many different ways there are. You could use this activity in one of two ways, depending on your children. The most obvious way is to focus on the different patterns that can be built up, but you could also use the activity to focus on the explanation or justification of the children's description or argument. You might like to have a go yourself before offering this activity to the children...

The task, along with Amy's Dominoes as a follow-up, also offers the chance to focus on any of the five key ingredients that characterise successful mathematicians.

You will need several sets of dominoes (you could make laminated card sets from this print out), one set between three or four children. If the dominoes are usually stored in a box, transfer them to a bag so that the children don't have a sense of a box being full.

Ask the children to tip the dominoes out onto the table and have a look at them, perhaps having an opportunity to play with them and arrange them into different patterns if this is the first time they have seen them.

Suggest that they may or may not be full sets and that before we can use them for a game we need to know if any are missing. Could they help you by finding out? Allow some time for this.

When a group gives you a definitive answer ask them how they know and challenge them to arrange the dominoes on the table in some way to show you that they have/have not got a full set.  Again allow some time for this.

When, and if, appropriate you could suggest that the children move around the classroom to have a look at what other groups have done. You may then want to offer a little more time for those groups who haven't made much progress to have another go, having seen others' responses.

Groups will respond in different ways. In increasing order of sophistication, groups may:

In each case, ask how the pattern/structure they have chosen helps. The most sophisticated explanations will use the idea of all possible pairings of the numbers 0-6.

The interactivity here may be helpful for whole class discussions of this activity and/or for learners to use as they work on the task, if real dominoes are not available.

How many are there with blanks?
Are there the same number of dominoes with ones?
Tell me how you're arranging them. Why did you choose that way?
Could you organise them in a different way?
How does this show you that you have/haven't got them all?

Reducing the number of dominoes can make a pattern easier to spot. Offer a subset, say 0-4, and allow time to play and look for patterns before asking if they have a full set.

What if you had a set of 0-9 dominoes (download a set here). How many do you think you would have? Do you need to make a set? How else could you record your ideas?
The task Amy's Dominoes is a natural extension to this activity and can be solved using the dominoes as a resource, or without them by more confident children.