We had quite a few solutions sent in for Amy and her dominoes. Don't forget that we are looking for solutions that include reasoning, not just the answer.

Thanks for a great problem. Both groups worked on it and we made it a corridor display to get some more kids (and parents) thinking about it.

Bjorn from Belfry Overstrand School in England wrote the following:

I wrote down all different dominoes in order (0:0, 0:1, 0:2...6:6), I counted them all and there were 28.
It told me that Amy had four dominoes missing.
I then added all the spots on the dominoes together and made a total of 168.
It told me that Amy was missing 43 spots.
I was looking for four dominoes that totalled 43 spots.
I began with the highest domino (6:6) because we had to get a high number (43) with a low number of dominoes.
I worked out that the missing were 6:6, 5:6, 5:5 and 4:6. These four dominoes totalled the missing amount of 43 spots!
Amy needs to look after her dominoes by putting them in a safer place!

Matthew from the British School in Brussels listed all the dominoes in a very systematic way, which is a great idea if you don't have a domino set to hand: 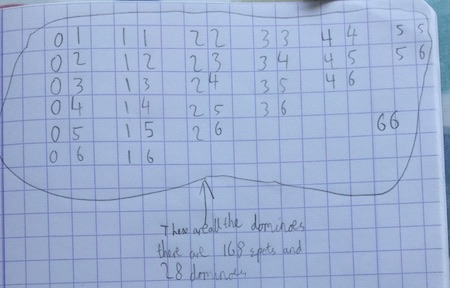 Matthew went on to describe his method, which was very similar to Bjorn's above. 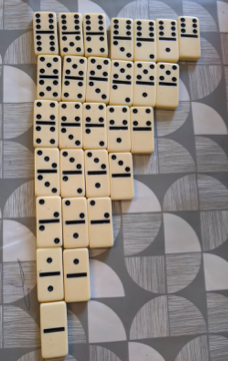 I noticed that there are 8 of each number.  So I did

and added them up to count the spots. There are 168 spots on a set of dominoes and there are 28 dominoes in a full set.

Which meant there were 43 spots missing on four dominoes.

43 shared between the four dominoes meant there were about 10 spots on each domino.  So I took out the two dominoes with 10 on which equalled 20. Then I took out the double six which took me to 32 so I needed an 11 and the only one was the 6 and 5.

I know this is the only answer because these are the four highest dominoes.

Thank you, Alex. Ella and Mia from Clatford Primary School also sent very clear solutions. Like Alex, Ella thought about what she could conclude from the fact that 43 spots were spread across only four dominoes. She said:

That is an average of over 10 spots per domino!

That's a helpful way of thinking about it, Ella. William from Churchdown Village Primary School also calculated an average number of dots per domino.

Suzanne journeyed through the challenge in a rather different way, working with a partner. I've summarised the method they used to work out how many dots there are in a set of dominoes. 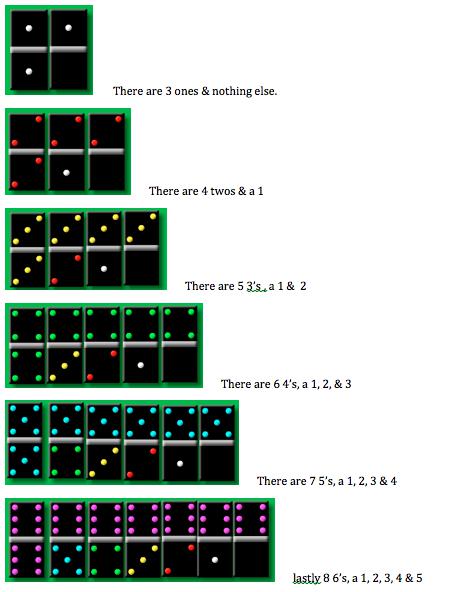 How about if there was one spot less missing - so that there were 126 spots. What might the possibilities be? Would there be more, fewer or could the problem not be solved?