Shriya from International School Frankfurt in Germany, Hayley and Yue from Colston's girls' school in the UK, Gabriel from Dulwich College Seoul, Ben and Henry from Robert Gordon's College in the UK, Antonio from International School of Luxembourg, Imran from Canada and Aadithya and Sivethini from Nower Hill High School in the UK found the new fractions in $F_5,$ $F_6,$ $F_{11}$ and $F_{12}.$ Ben said:
There are 4 fractions that appear in $F_5$ that don’t appear in $F_4$. These are $\frac15, \frac25, \frac35$ and $\frac45.$
In $F_6,$ there are 2 new fractions that aren’t in $F_5.$ These are $\frac16$ and $\frac56.$
These appear as these are the simplest forms of these fractions. In $F_{12}$ you couldn’t have $\frac2{12},$ as that fraction can be and has been simplified into $\frac16.$
The new members of the sequences are the simplest form of each fraction.

Hayley noticed that as well as $\frac1n$, you always get $\frac{n-1}n$. This reminded Imran of something else:
We see that the numerators [denominators] of the first 2 and last 2 fractions correlate with the numbers in pascals triangle (other than $F_1$)!!!  I found it really neat.


Is there a way of working out how many fractions there will be in the next sequence?
Yue, Scott, Timmy, Jayden & Charlie from Abingdon School in the UK, Shrish, Pritu and Harry from Bangkok Patana School in Thailand, Tamitha, Emma and Chanelle from Frederick Irwin Anglican School in Australia, and Sumayyah, Toby, Kanusha, Suahsini and Emer from Nower Hill noticed something about prime number Farey sequences. This is some of Tamitha, Emma and Chanelle's work:

Toby said this in a more general way:
When the number of a Farey sequence is prime it will have the number sequence it is minus 1 incremented from the previous sequence.
So if $p$ is prime, then $F_p$ has $p-1$ fractions that weren't in $F_{p-1}$.

Yue suggested a reason:
I think this happens because a prime number only has 2 factors (itself and 1)

Gabriel extended this to composite numbers:
If the denominator is not prime, add however many possible fractions there are but taking away how many can be simplified.

Shriya described a method:
The best way of working out how many fractions there will be in the next sequence is to first write down the new fractions [fractions with the new denominator]. Then you should cross out the fractions that have an equivalent fraction. Count the remaining fractions and add the number to the number of fractions the previous sequence has.


Scott, Timmy, Jayden & Charlie talk about factors, but actually this is not exactly right, because $\frac68$ can be simplified, even though $6$ is not a factor of $8$. In fact, we should be talking about something slightly different. Sumayyah, Kanusha, Emer and Shyam from Nower Hill used the term 'coprime'. This is Shyam's investigation into coprime numbers, and what their connection is to Farey sequences.

Sumayyah explained how this is related to what we've already seen:
Two consecutive numbers will always be coprime, so $\frac{x-1}x$ will always be added (e.g. $\frac45, \frac56, \frac78$)

Prime numbers will be co-prime with any number, so all numerators less than the denominator will be added to the sequence.


Lilly from Frederick Irwin, and Sumayyah, Leo, Aadithya, Sivethini, Kanusha, Emer and Suahsini from Nower Hill, Henry and Shriya noticed some symmetry in the Farey sequences which can help explain why they contain odd numbers of fractions. Lilly said:
I found that the fractions were mirrored and that each time there was a new sequence, it was adding on two fractions at a time. 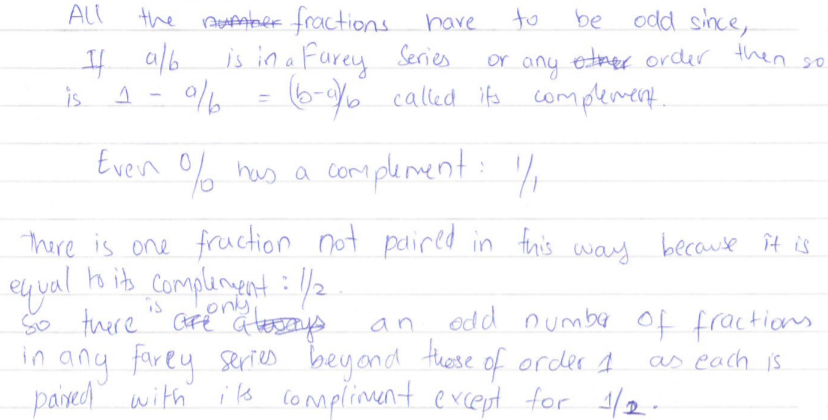 Sumayyah drew a diagram showing the fractions around a circle, which shows the symmetry. Click here to see Sumayyah's diagram.

In fact, the reason for this symmetry is that if $a$ and $n$ are coprime, $n-a$ and $n$ are also coprime. Click below to see a short proof of this.

Imagine that $n-a$ and $n$ are not coprime, so they are both in the $c$ times table for some number $c$.

But the difference between two numbers in the $c$ times table is always a multiple of $c$. 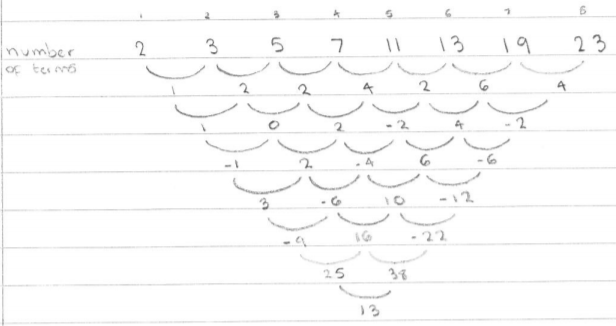 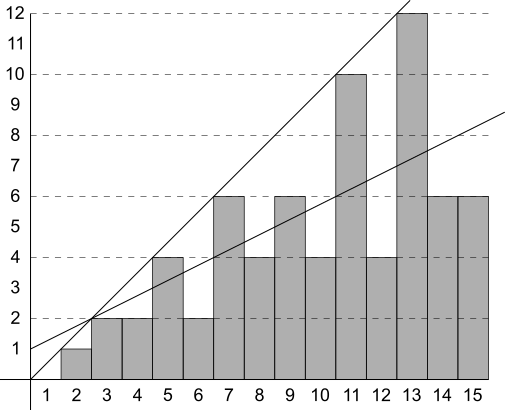 This led to two [lines], one for prime numbers, the other for other numbers. The one for all numbers is $y=\frac12x+1$.

Markus' line $y=\frac12x+1$ doesn't actually touch any more of the bars. Can you explain why?

The Euler totient function, $\phi(n)$, is usually defined as: $\phi(n) = \text{the number of numbers less than }n\text{ that are coprime to }n$.


Sumayyah, Manav, Kanusha, Markus, Emer and Suahsini also investigated the mediant of the fractions in the Farey sequences, as introduced in Mediant Madness. This is Emer's work, which is also about the median and the mean: 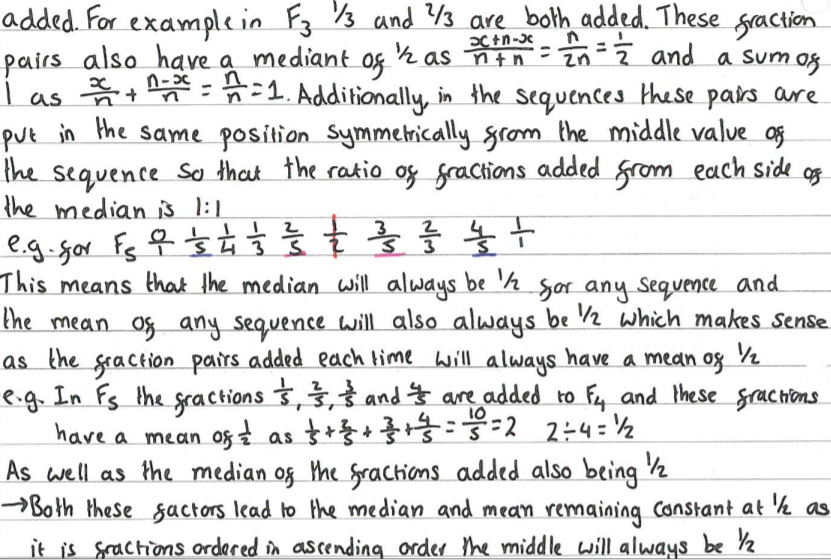 Sivethini and Suahsini also found this result for the mean, but Sivethini described it in a different way:
The sum of the fractions in a Farey sequence multiplied by 2 equals the total number of values in that sequence.

Finally, Manav from Nower Hill investigated mediants much further. This is Manav's work: 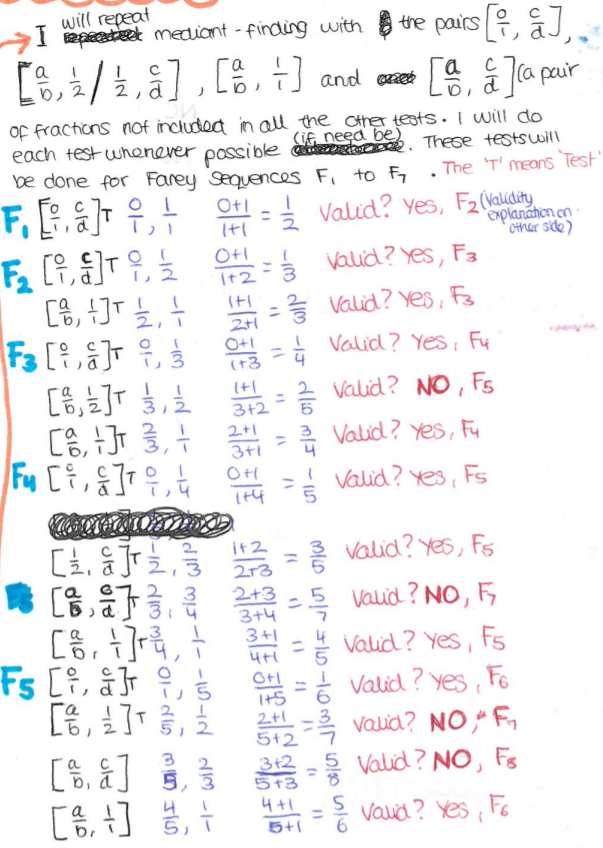 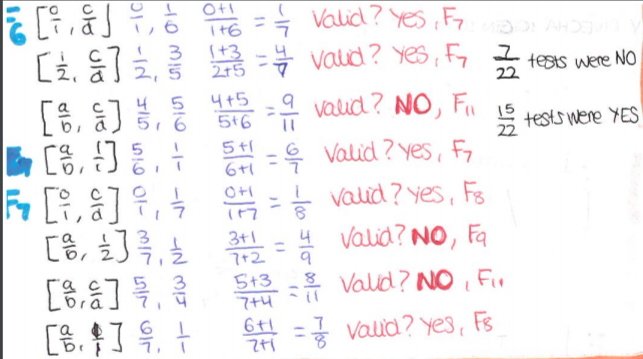 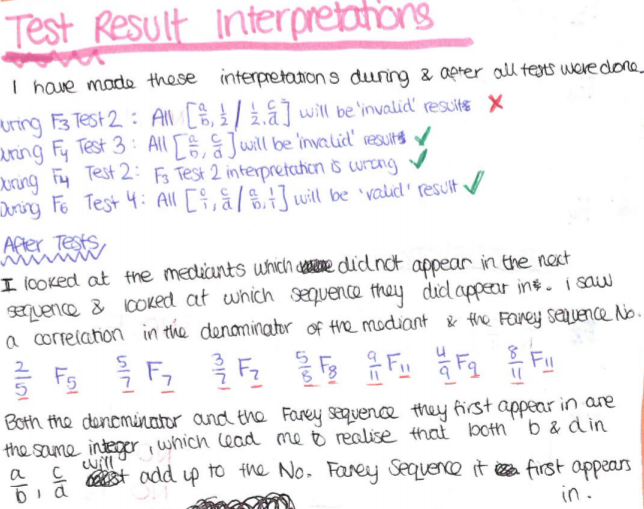 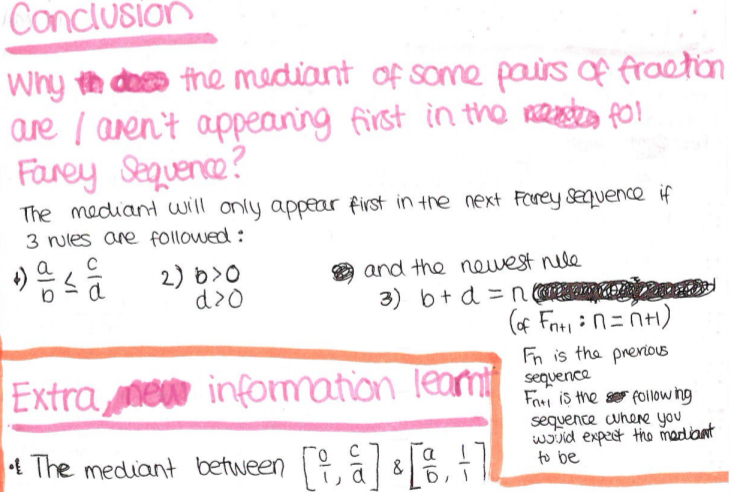 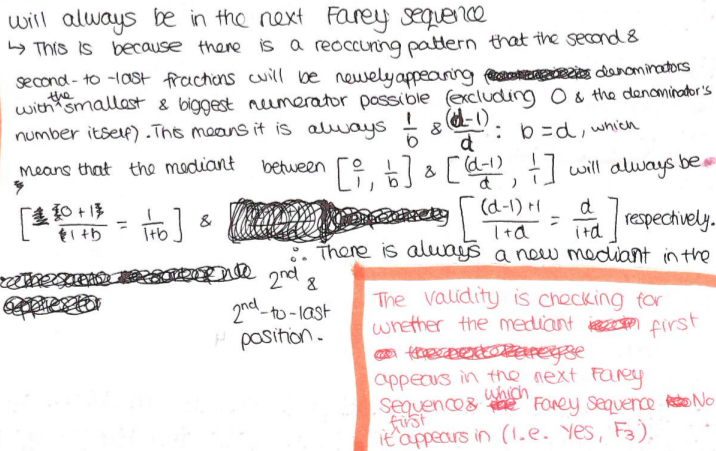