Arsenal Collection: Who's the Winner? 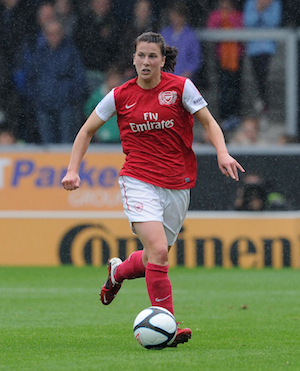 When the Arsenal women's team plays Chelsea Ladies, they are equally matched - at any point in the match, either team is equally likely to score.
What are the possible results if 2 goals are scored in total?

Why are they not all equally likely?

This mathematical model assumes that when a goal is scored, the probabilities do not change. Is this a reasonable assumption?

Alison suggests that after a team scores, they are then twice as likely to score the next goal as well, because they are feeling more confident.
What are the probabilities of each result according to Alison's model?

Charlie thinks that after a team scores, the opposing team are twice as likely to score the next goal, because they start trying harder.
What are the probabilities of each result according to Charlie's model?


The models could apply to any football teams or even other team sports where a small number of goals are typically scored.

You could find some data for matches between closely matched teams that finished with two goals and see which model fits most closely to what happened.

You will need to make some assumptions about what it means for teams to be "closely matched". Can you explain the reasoning behind the assumptions you chose to make?