On the table in front of you is a grid like this:- 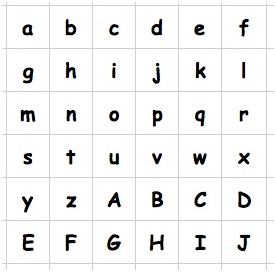 Now imagine that you have another grid, just the same but made of plastic that you can see through.

Each of the letters stands for a different number. As in a usual grid the numbers go up from the top left right through to the bottom right. BUT, the numbers might not be consecutive, so the first line could be

or something like that with numbers getting bigger but not necessarily in equal steps.

Now imagine that you have the same grid, but made of plastic that you can see through. (Letters representing the same numbers). You place the plastic one over the one on the table so that it covers it completely. You could have flipped it over and/or turned it around as you put the plastic one down. Sometime in the future the numbers that are paired, one above the other are multiplied together. Then, all the results of multiplying together will be added together.

Your challenge is to say which way of flipping over and/or turning the plastic grid will give you the highest and which way will give the lowest totals.

This problem is presented for the highest-attaining pupils and can challenge them both in number and spatial skills.

The six by six grid can be printed from here (doc., pdf), and then presented to the pupil. The challenge may need to be explained very clearly so as to prevent a lot of unnecessary calculations being made.

How did you arrive at this? Explain to me the solutions that you have come to.