A description of how to make the five Platonic solids out of paper.

This task develops spatial reasoning skills. By framing and asking questions a member of the team has to find out what mathematical object they have chosen.

Like most NRICH articles the reader will get most from it by doing the mathematics before moving on from one paragraph to the next.

(This article is based on a mathematics workshop for 12 year olds given by Warwick Evans and Alison Clark Jeavons in Cambridge in February 2000. The photos were taken at the ATE / NRICH Mathematics Superweek holiday for 10 to 13 year olds at Southam in August 2000. ) 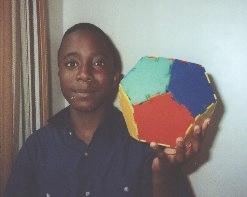 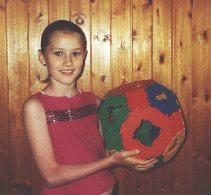 All you need to follow this article is very simple arithmetic, to know what an angles is and to use simple logical thinking. Though it is not essential you will be able to visualise the solids much more easily if you can use a construction kit (such as the plastic shapes which fit together made by Polydron as shown in the photos) to make the solids while reading this article.

The regular polyhedra are called the Platonic solids and the semi-regular ones the Archimedean solids after two famous Greek mathematicians.

Using the plastic polygons made by Polydron, we can discover the three regular tessellations made by triangles, squares and hexagons.

Next we can introduce a notation to describe the vertex formed by each tessellation. This notation, describing the number of edges of each polygon meeting at a vertex of a regular or semi-regular tessellation or solid, was devised by the Swiss mathematician Ludwig Schlafli (1814-1895). He was a schoolteacher who did mathematical research in his spare time.

Each vertex in the hexagonal tessellation is surrounded by three 6-sided polygons and we say that the vertex form is 666.

The square tessellation has vertex form 4444.

In a similar way, each of the vertices in the triangular tessellation is surrounded by six 3-sided polygons and has the vertex form 333333. The interior angles of the triangle, square and hexagon are $60^{\circ}$, $90^{\circ}$ and $120^{\circ}$ respectively and it can be seen that the sum of the angles at a vertex in any of the three tessellations is $360^{\circ}$. We can see that these are the only possible regular plane tessellations because pentagons, with interior angles of $108^{\circ}$, cannot fit together around a vertex and for polygons with more than six sides the interior angles are more than $120^{\circ}$ so it is impossible to fit three or more together around a vertex.

In any solid, the number of faces at a vertex must be more than two. We begin with triangles.

Using only triangles, each vertex must have fewer than 6 faces at a vertex (otherwise we end up with a plane tessellation). We can join three 3-gons (i.e. triangles) to make a vertex with vertex form 333. Carry on constructing a solid so that each vertex has form 333 and we arrive at the tetrahedron with 4 triangular faces.

We can join four 3-gons to make a vertex with vertex form 3333 and this solid is the octahedron with 8 triangular faces.

We can join five 3-gons (i.e. triangles) to make a vertex with form 33333 and this solid is the icosahedron with 20 triangular faces.

Now move on to squares. To make a solid, we must have more than 2 faces at a vertex and fewer than 4 [Why fewer than 4?]. This leaves us with the vertex form 444 and we construct the cube (or hexahedron) with 6 square faces.

Next comes the pentagon. Each vertex of any solid must have more than 2 faces. Once you convince yourself that we cannot have a vertex of form 5555 we are left with the regular solid with vertex form 555 called the dodecahedron with 12 pentagonal faces.

We cannot make a regular solid with any polygon with six or more sides [Why?]. 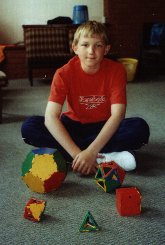 We have shown that there are five and only five regular solids, and we can begin to complete the following table. In the photo you will see that Ross has constructed the five regular polyhedra (the Platonic Solids named after Plato).

After careful counting of vertices and edges - it isn't as easy as it sounds - we can complete the next two columns. Try to do this for yourself then check your results .

The conjecture that F + V - E = 2 should come from examining the numbers in the F, V and E columns. This is the famous (and so useful) Euler's Theorem . Here it is only a conjecture made from looking at our table but it is in fact true - finding a proof is left to the reader.

The next column - Angle Deficiency - supplies the core theme of this activity.

Definition: The angle deficiency at a vertex is $360^{\circ}$ minus (the angle sum at the vertex).

We can fill in the next column in the table with the angle deficiency for each Platonic solid provided we know the interior angle of each $n$-gon.

If you walk all the way around a circle back to your starting point you turn through a total angle of $360^{\circ}$ or (using another measure) $2\pi$ radians. Imagine walking around a regular $n$-gon starting from one of the vertices. Now the curvature, instead of being evenly spread around the edge, is concentrated at the vertices. At each vertex you make the same turn to walk along the next edge. When you get back to your starting point you turn through the same angle to face the direction you were facing at the start and altogether you have turned through a total angle of $360^{\circ}$. Each of these turns is therefore $(360/n)^{\circ}$, the exterior angle at the vertex. The interior angle is therefore $(180-360/n)^{\circ}$.

The final column in the table - total angle deficiency - is just the sum of the angle deficiencies at every vertex of a particular solid. Since, in each case, the vertex form is the same at each vertex, we can just multiply the number of vertices (column V) by the angle deficiency we have just calculated. We end up with the following table.

Now let us relax the condition of regularity. A semi-regular solid is one which is made up of more than one type of polygon but in which all vertices have the same vertex form.

Suppose we choose the vertex form 366 so that each vertex is surrounded by one 3-gon and two 6-gons. Will this choice generate a semi-regular solid and, if so, how many hexagons and how many triangles do we need? We aim to use Euler's theorem and the Total Angle Deficiency theorem to help us fill in another row in our table. We already have the second and the last columns.

Now we go through the following steps:

But how many of the 8 faces are triangles and how many are hexagons? What is the shape called? 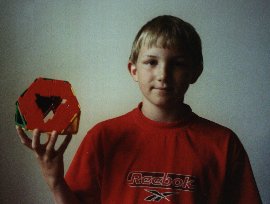 In this photo Ross is holding one of these solids and if you look at it carefully you might be able to see that it could be obtained by "chopping off" the vertices of a tetrahedron. It is called a truncated tetrahedron.

Why not just choose a possible vertex form, and see what happens? Your vertex form must be such that the angle sum is less than $360^{\circ}$. Things may go wrong. For example, if you were to choose the vertex form 335 then the angle deficiency is $360-120-108=132$ which does not divide 720 so no semi-regular solid with such a vertex form exists.

Some vertex forms produce prisms, such as 344 the triangular prism which has three square faces and two triangular faces. Other vertex forms produce anti-prisms. In addition to the prisms and anti-prisms you will produce all the Archimedean solids (named after Archimedes) whose details are on the completed table below. You may like to fill in your own table and then check your results with this table at the end of this article. 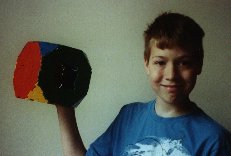 Ben has made a truncated cube with vertex form 388. Can you see that it could be made by cutting off a tetrahedron from each vertex of a cube?

Duncan and Suzanne have each made a rhombicuboctahedron with vertex form 3444. By using 'skeleton' pieces for the faces rather than solid plastic polygons you can look inside the polyhedra to study them. 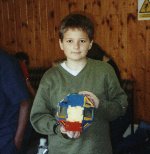 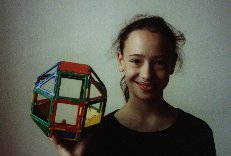 The first known mention of the thirteen "Archimedean solids" is in a manuscript from the fifth book of the "Collection" of the Greek mathematician Pappus of Alexandria, who lived in the beginning of the fourth century AD.

You will find illustrations of the polyhedral solids and much interesting information about these solids and their geometrical and practical construction on the World Wide Web site maintained by Tom Gettys and further information at http://mathworld.wolfram.com/ArchimedeanSolid.html

The St Andrew's web site is a good starting point for finding more about Plato . and about Archimedes .

The 5 Platonic and 13 Archimedean Solids 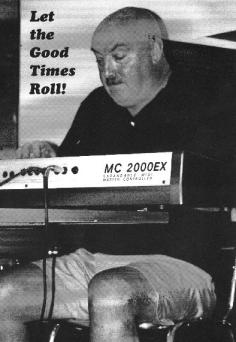 Sadly Warwick died in July 2000. He was much loved by his colleagues and students as an inspiring teacher with original ideas and a wonderful way of helping people to understand and to enjoy mathematics. He had a great zest for life.