Many people must have worked really hard on this one, there were lots of detailed answers. Well done! Some people found some solutions like Alison's.

A key idea is that you can use fractions or decimals to get more solutions. Alison found one more for us, and Patrick found a few extra too.

Notice that we can get an odd number for the perimeter in more than one way, and even find a fractional perimeter. Thomas and Zaki made a great observation.

There are infinitely many perimeters you can make with an area of 24 as you
can keep on multiplying the length by 2 and dividing the width by 2 so the
perimeter keeps getting bigger.

Raadiyah realised that you could divide by numbers other than 2 to find the following.

Amy had a great idea for finding a small perimeter using square roots. The square root of 24 is not even expressible as a fraction or a finite decimal, it is irrational!

To get the smallest possible perimeter it needs to be a square so I found the square root of 24 which was approximately 4.898979486.

If you know how to plot tricky graphs and how to find the solution to simultaneous equations you might like to think about how to make any possible perimeter. 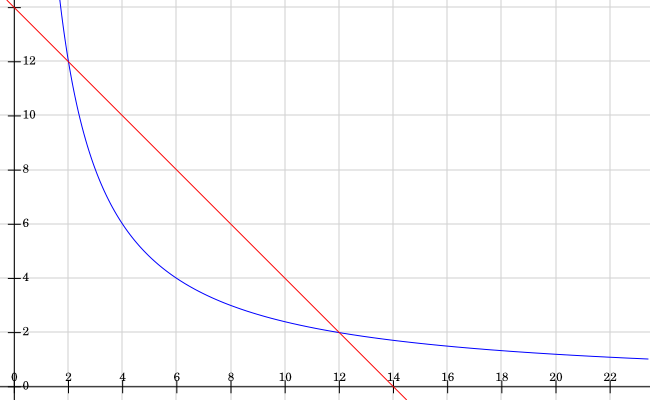 I've plotted the graphs 2x+2y=28 in red and xy=24 in blue. Where do the lines intersect? What does this tell us about the possible rectangles?
The NRICH Project aims to enrich the mathematical experiences of all learners. To support this aim, members of the NRICH team work in a wide range of capacities, including providing professional development for teachers wishing to embed rich mathematical tasks into everyday classroom practice.