This article is part of our collection Great Expectations: Probability through Problems.

The concept of multiplying the probabilities of events to find the probability of the combined event is often simply stated to students as a rule or method, without any justification or explanation.  Our intention in this sequence of problems is to provide a structure which can be used to establish it more intuitively.  Students progress from expected results as whole numbers (natural frequencies), to proportions of natural frequencies, to fractions  - at which point we have probabilities.

Revisiting Which Team Will Win?

Which team will win?

Every weekend, Team Beaver and Team Yeti play each other at 2-Goal Football - they play until two goals have been scored.  Sometimes games last only a minute or two, sometimes they seem to go on for ever.

Over a 36-week season, which team is likely to win more games?  Team Beaver or Team Yeti?
A good place to start is by (re)visiting Which Team Will Win?

Start by reminding students of the problem, and that they used dice with four yellow sides and two blue sides to model the football games.

They should complete a tree diagram for the expected results over a 36-game season - this could be done as a class or individually, as appropriate.

The focus should then move to considering what proportion of the 36 games resulted in each outcome.  A starting point could be:

It will help students if they express proportions as fractions, rather than as decimals or percentages - extending the idea that TY would be expected to score 2/3 of the goals, and TB 1/3.  Fractions should be expressed with a denominator of 36, to make it easier to see the connection with the whole numbers we started with.  Of course, students can simplify these once they have grasped where the fractions come from and what they represent.

Moving on: Who Is Cheating?

A new test is in development to try to identify athletes who use a certain banned substance to enhance their performance.

The development team has accumulated data which indicates that although the test shows good results in detecting an athlete who has used this substance, the false positive rate is more worrying.

The task is very similar to The Dog Ate My Homework, involving a similar experiment and analysis of results, and starts in a very similar way.

Students find the expected results for each outcome and represent these on a tree diagram (below right).  In both problems, they can then use the tree diagram (and equivalent 2-way table) to answer questions of the type 'What proportion of athletes who have not been taking the banned substance would we expect to get a positive test result?' 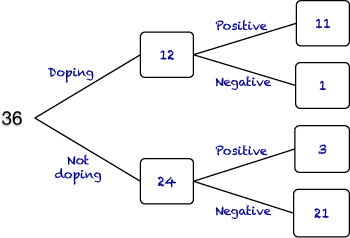 Who Is Cheating? is structured in a similar way, to build on The Dog Ate My Homework, but is intended to take students further by using the problem as a vehicle to develop an understanding of trees as probability trees, which can be used to aid calculations of probabilities.

A typical dialogue between the teacher and the class might develop as follows:


What proportion of the athletes who were taking the banned substance do we expect to test positive?  Is it all of them?
No, one of them should test negative.
So what proportion of the athletes are doping but test negative?
1/36.
OK, so we expect that 1/36 athletes are doping and get a negative test.
But we don't always want to have to work with 36 athletes.  We need a more general method which will give us answers for other numbers of athletes.
For this we need to focus on the proportions, rather than the numbers.
How could you use the tree to calculate that 1/36 proportion, starting from the 36 athletes?
If a third of the athletes are doping, that's 12 out of the 36 - that's this branch.  Then there's a 1 in 12 chance they get a negative test - that's this branch.
OK, so we have 12 out of 36, that's 1/3, for the first branch, then 1/12 for the next branch, and they combine to give us the overall proportion of 1/36.
What we did was to find 1/12 of 1/3.  What calculation does that correspond to?
Multiplication.
OK, let's test that out by thinking about the proportion of the 36 athletes who were not taking the banned substance who tested positive ... 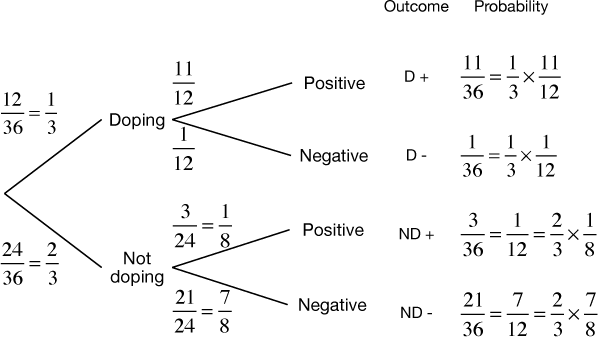 Now I realise that the chances of it going smoothly like that may not be 100% (!), but several discussions along these lines, using all the four routes along the tree diagram should help students to grasp the argument.  The individual probabilities (1/3, 2/3, 1/8 and 7/8) have been chosen so that they can be used to show the structure of the calculations (ie. there are four different calculations, and it can be made obvious which individual probability contributes to which answer).

Of course, this is not a formal proof of the multiplication rule.  But arguments along these lines should help students to understand why we multiply along the branches.  They should already be familiar with the idea of adding the results when they want more than one set of branches, from their work on the experimental and expected results of Which Team Will Win? and The Dog Ate My Homework!