Work with numbers big and small to estimate and calulate various quantities in biological contexts.

What biological growth processes can you fit to these graphs?

How does shape relate to function in the natural world? 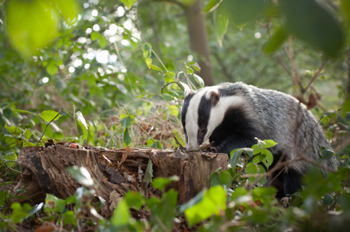 During 2012, the British government has been considering culling badgers in parts of the UK, because of fears that they help spread TB among cattle.  In October, the proposed cull was delayed until summer 2013.  One reason given for the delay was the unexpectedly high numbers of badgers.

But how do scientists estimate the number of wild animals in a given area?

One way is to use the method of capture-recapture.  Suppose scientists trap and electronically tag a number of badgers on one occasion, then release them back into the wild.  They then set up detectors with cameras in several locations around the forest.  Some time later, the scientists return to collect the cameras.  They look at all the images, recording how many badgers there were, and how many of them were tagged.

In this simulation we're going to use a bag of coloured counters (or multi-link cubes, or similar small objects with different colours).  Choose one colour - this is going to represent the tagged badgers.  The bag represents the area being sampled.
You should now have three figures recorded.
Can you see how to estimate the size of the population from them?

Repeat the experiment a few more times.
What estimates do you get for the total population of counters in the tub?
You could calculate the average of your estimates and their spread.

Now count how many counters there are altogether in the tub.
How good were your estimates?
How well did the average you calculated describe the population of counters?
If you take account of the spread of your estimates, is the actual number within that range?

What problems do you see in using a method like this to estimate the population of a wild species in a particular area?
Can you think of any ways to refine the method to make it more accurate, or any other situations in which it might be useful.

This was essentially the method used by the Allies to gather intelligence on how many tanks the Germans were manufacturing during WWII.
Johnnie Ball's video about estimating the number of black cabs in London.
The NRICH Project aims to enrich the mathematical experiences of all learners. To support this aim, members of the NRICH team work in a wide range of capacities, including providing professional development for teachers wishing to embed rich mathematical tasks into everyday classroom practice.