Toad in the Hole 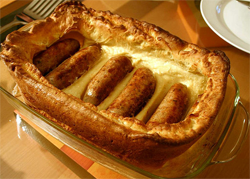 Toad in the Hole is a traditional English dish, consisting of sausages in a batter, and served with gravy.
STEM - living world. Physics. Investigations. STEM - physical world. Design. STEM - design technology. Food technology. Calculating with decimals. Maths Supporting SET. Calculating with ratio & proportion.
The NRICH Project aims to enrich the mathematical experiences of all learners. To support this aim, members of the NRICH team work in a wide range of capacities, including providing professional development for teachers wishing to embed rich mathematical tasks into everyday classroom practice.