What Was in the Box?

What Was in the Box?


A number in a little box is put into a wonderful big box that adds something to the number and then a new number comes out at the end: 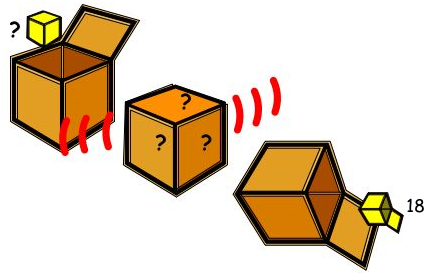 The first time this happens, 10 is put into the little box, so what happened in the big box to get the answer in the picture above?

Now three more boxes with new numbers in, go into the wonderful box one at a time. It still does the same as before.

Imagine four new boxes now (with new numbers in) and the wonderful box does a new and different add or take away this time. For one of these boxes the number 10 was put in. The numbers that come out are these:

What could have happened? How did you work these out?
Discuss with others and see if there were different ways that you found the answers.

Of course this problem is rather like a function machine, but it can be more interesting and is easily extended to challenge a wide range of pupils. It could be used to introduce children to the idea of addition and subtraction, and offers great opportunities for learners to record in different ways.

Introduce the class to just one number going in and give them one outcome to start with so that they understand the process. Then, gradually increase the number of numbers going in until you reach four, as in the problem. Your own examples can be adjusted in complexity according to the level of your pupils.

Once learners have had some time to work on the first part of the problem in pairs, ask them to share their ways of working with the whole group. Look out for those who give good reasons for choosing particular methods.

You may also like to draw attention to different methods of recording that you observe.  Some children may have drawn pictures whereas others may have created calculations.

What might have gone on in the box to get this number answer?
Could that have produced the other answers too?

Pupils who have gone onto multiplication and division and may be moved onto further thinking by going to What's in the Box?.