Investigate the family of graphs given by the equation x^3+y^3=3axy for different values of the constant a.

Find the maximum value of n to the power 1/n and prove that it is a maximum.

In the first graph below, we have a cubic with two turning points and one point of inflection. 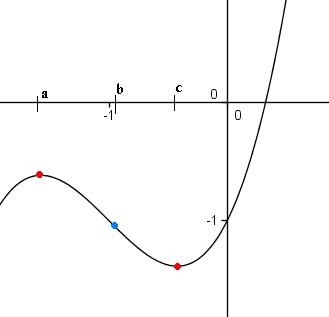 The blue dot indicates a point of inflection and the red dots indicate maximum/minimum points. A change of inflection occurs when the second derivative of the function changes sign.

To show there is a blue point in between the two red points, we consider a gradient table of the above curve (try this with any similar looking cubic if you are not sure):

We then consider a quintic, as shown below. This has four turning points and three points of inflection, marked with red and blue dots respectively. 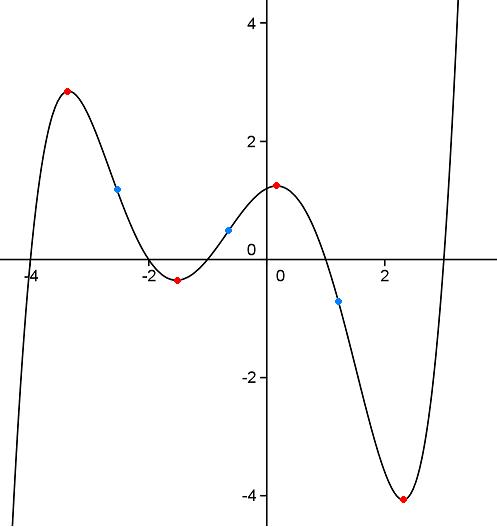 We prove this by looking at a general cubic equation f(x) like in the first graph, and treating its derivative as a new function. This new function is zero at points a and c.

Thus the derivative function must have a turning point, marked b, between points a and c, and we call this the point of inflection. The existence of b is a consequence of a theorem discovered by Rolle.

A Note on Concavity and Convexity

Visually, we can see these definitions by drawing a straight line between any two points on the curve. The function is convex if this line is above the curve, and concave if below. 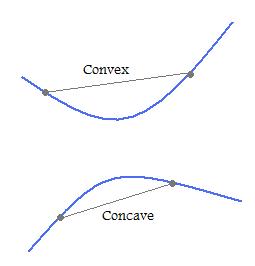 The point of inflection occurs when this line crosses to the other side of the curve. That is, the curve will alternate between convex and concave with the points of change-over being points of inflection.

Sometimes stationary points and points of inflection coincide, as in the function $y=x^3$. However this is not always the case, as in the first example.


We now consider our conjecture in terms of the two cubic equations.

To find the stationary points, we set $\frac{\mathrm{d}y}{\mathrm{d}x}=0$
$\Rightarrow x=2\pm i\surd5$, so our turning points are imaginary.

As expected, we have one more stationary point than point of inflection, and this time all our points are real. To determine the order of our stationary points, we calculate the second derivative at $x={-1\over 3}, 2$.

Thus the curve has one point of inflection which is in between maximum and minimum points (not necessarily real), the order of which is determined by the value of a.

Similarly if $a< 0$ then for large negative values of x the function will have positive values, and so the first turning point will be a minimum.

We leave you to look at further patterns for polynomials of order 4 and greater!