Some people say "Well it's just about being tidy", but sometimes things just seem to disappear!

We all use ten very useful things that come in very handy for all sorts of things. We use numerals for counting, and if you're used to NRICH Challenges, you use them for exploring.

Well now, what would happen if we lost one of these numerals or digits as we call them sometimes? It could be that we lost all the nines.

Or maybe back in history early man decided to count in nines instead of tens.

We would have to count:-

BUT this $10$ would NOT be read as the word TEN instead we would say NINE.

[You might notice that when, before we lost it, we had the number $9$ we would say TEN when we saw $10$, but we did not have a single symbol for TEN.]

So counting further we have to go:-

Much further on if we were counting all the small squares on a chess board we would have:-

If we were counting the small squares on a snakes and ladder board you would have:-

Well this is such a different thing to look at we should have a look a bit further. BUT FIRST have a go at writing the numbers out in this way, and then writing down how we could say it [like I have above from $1$ to $22$] and carry on until you've reached the number of years that have gone by in this century.

So going further we will have a look at the multiplications table. You might like to have a go on your own.

So start off with this:- 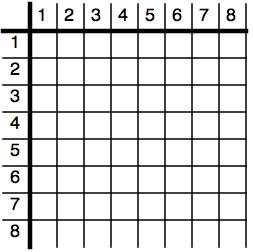 You could find help here.

Now here's a table of numbers for you to investigate patterns. Have a look at the relationships between various numbers.

Remember to talk about the numbers in a new way, so that the last number is "seven nines and one". [NOT "seven tens and one" or more usually as "seventy one".]

There's not a lot more I want to say. Except that what ever you find out do send those findings to us because we'd like to be able to share them with others across the world!

The simplest of things will interest us.

I always ask you to carry on further by asking questions like:-

Another example might be "What if when we lost the $9$ we had a look at some big addition calculations?" like :-

or maybe you'd prefer it as

I invite you to invent some good "I wonder what would happen if I ...?" questions and follow those questions further.

This investigation can be seen as one to introduce multibase work. Many articles have been written about the use of working in different bases. Some of you will remember using Dienes Multibase Blocks for the same purpose. It can certainly be of use to help pupils really get a better grip of the four rules of number and what is happening when we are working in our own base ten.
On the other hand it is a useful investigation in its own right and from the multiplication table many patterns can be found. It is good to encourage pupils to get to the reasons WHY these patterns and relationships occur.

It is possible to have aliens that have nine "fingers" instead of ten. You can then go through some simple counting and adding on as if you are this nine-fingered alien.


Having done this outloud, you could introduce the way of writing the numbers to the group before suggesting they continue themselves.

Tell me about this counting in groups of $9$.

You might find it very useful to explore the similarity with multiplying by $8$ in this system compared to using $9$ in the base $10$ system.
There are strong links to digital roots which you can read about here. There are also some other NRICH challenges that could be worthwhile looking at after this one: Consecutive Numbers and EWWNP (Exploring Wild & Wonderful Number Patterns).

Some children will find it useful to have something that can show the number nine physically - a toy alien with nine fingers for example.