You have to complete the task yourself but with support and advice from other members of the team of four. (So get three others to do this activity)
A nearby adult can assess how well the team is good at, 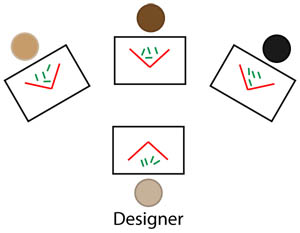 As you see above, you need to arrange the desks and some props so that everyone can see everyone else but no one can see what anyone else is building.
One possibility is for the designer to face the other three team members and make the design inside a box whilst team members try to recreate the design behind books or folders used as screens.
Choose someone in the group to be the designer.


You will need four sets of lolly sticks (or similar) - up to 10 in each set.
Give one set of lolly sticks to the designer and one set to each of the other team members.


Team members can ask questions about the design at any time and the designer answers in as helpful a way as possible.
When a team member thinks they have a completed design, they ask the designer to check. If it is right they can then aid the designer in answering questions. If they do not have the correct design the task continues.

This task focuses on the creating of shapes and patterns using line segments and the emphasis is on using accurate mathematical language to describe position and orientation. The learners need to listen carefully to follow the instructions they are given or explain clearly and precisely what they do with the lolly sticks.


The task encourages the development of team-building skills such as helping others to do things for themselves, responding to the needs of others, encouraging everybody to help each other and explaining to each other by telling how. (This is one of a series of problems designed to develop learners' team working skills. Other tasks in the series can be found by going to this article.)

A team has four or more members.  You may wish to use an adult as an observer.


Before starting this practical activity you might wish to ask each member of the group to draw their design, ready for when they act as designer for the rest of the team. Using squared paper may support the production of more manageable designs.


The focus of attention for the teams is asking, explaining and helping each other. The completion of the task, whilst rewarding for all concerned, is not the main purpose of the activity.


If learners need some support with their positional language, a word list can be found here.
When teams have finished working on the task it is important that they spend time discussing in groups, and then as a whole class, how well they worked as a team. They can consider what they have learned from the experience and what they would do differently next time, particularly in terms of how to ask questions and answer them effectively. Your own observations, as well as those of observers, might inform the discussions.

Other team-building tasks can be found by going to this article.
The NRICH Project aims to enrich the mathematical experiences of all learners. To support this aim, members of the NRICH team work in a wide range of capacities, including providing professional development for teachers wishing to embed rich mathematical tasks into everyday classroom practice.