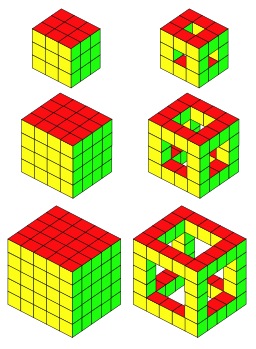 Here we have three solid cubes and three cubes that have holes.
They're just the first three in a series that could go on and on.

I was wondering about the number of cubes used in each ...


Then I thought about the difference between those numbers.


You can call these types of cubes what you like but I called them "Solid" and "Frame".

How about exploring the numbers for the next few Solid and Frame cubes?
Do you notice any patterns?
Can you explain any of the patterns?

This problem gives opportunities for pupils to explore, to discover, to analyse and communicate. It's a real catalyst for pupils' curiosity. It allows pupils to approach it in whatever way they find most helpful. It also provides opportunities for using and extending visualising skills. The activity also opens out the possibility of pupils asking “I wonder what would happen if . . .?” showing their resilience and perseverance.

You could show the group models of the first solid cube and first frame cube. Invite them to talk to a partner about them and to share their observations with the whole class. You could then ask pairs to suggest what the 'next' two cubes would look like. You could also ask them to explain why they think you started with a $3$ by $3$ by $3$ cube rather than, say, a $2$ by $2$ by $2$ one.


You may like to challenge learners to find the number of small cubes each is made up of and they could share their methods for doing so. Some may need to make their own model to help them, but others will be able to calculate the number of cubes using certain facts they know. By sharing different methods, some children may take on a new method because they find it works better for them compared with the original way they chose. Pupils can then work on the challenge itself in pairs or small groups.


Give the class the freedom to choose their own way of recording their findings and share these in the plenary, as well as sharing results. Encourage explanations of the number patterns, rather than just 'pattern spotting'.

Learners could explore what happens when they count the square surfaces that are visible on each small cube.

Having plenty of interlocking cubes available will aid some children, whereas others may wish to use computer drawing programs and/or spreadsheet software.