First we worked out the letters in the left hand column which were v and c. We worked out that it could only be 7 and 4 because they were the only two numbers that were below 10 that had an LCM of 28. We saw that c=7 and v=4 because v was on a row where it had to be a multiple of 8.

Next, we worked out the middle row. We did this by using the 7 that we got earlier, and worked out that the only number that would give an LCM of 56 would be 8, so w=8. We then filled in the v, c and w squares.

Next, we worked out that e=2 by looking at the second column. We already had the 9 and the 5 and we needed an LCM of 90 - 2 was the only number that worked in this situation from the ones we had left. In the seventh column we needed an LCM of 252 and we already had 9, 7 and 4 which have an LCM of 252, so the missing variable had to be 1, so n=1. We then filled in the e and n squares. After that the only remaining letter was d and the only number we had left was 3, so d=3. That worked because the LCM of 5,2,1 and 3 gave us 30 on the seventh row.

The resulting grid was a regular Sudoku, and we filled the numbers in using the normal rules. 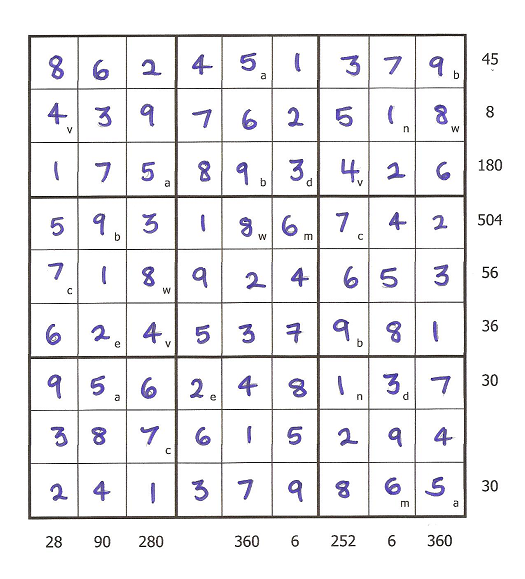 Rhea from Loughborough High School solved this problem in a different way:

And here is a link to that sudoku.