What fractions can you find between the square roots of 65 and 67?

Can you express every recurring decimal as a fraction?

If the yellow equilateral triangle is taken as the unit for area, what size is the hole ?

The screen shot on the Hints page shows some solution arrangements.


When we looked at the solutions sent in, some people had started by putting triangles together until they could make a hexagon, others started with a hexagon and looked for ways it might split up into the two types of triangle.

Well done to Daniel from Royston and to Georgina from St. George's School for seeing the answer to the first important question :

'Did that tell you something about yellow and green triangles, about how they relate to each other' ?

Two yellow triangles make a rhombus of a size which can also be made by two green triangles. 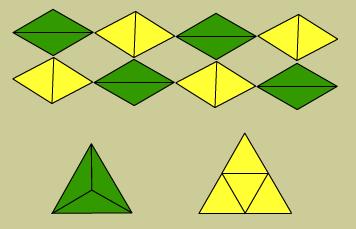 You can make equilateral triangle arrangements from yellow triangles : 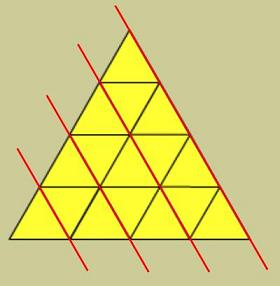 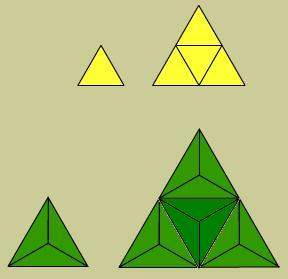 Keeping in mind that a and b are whole numbers ( a position in a sequence ) , a ² would have to have a factor of 3 to match 3b ² , but any factor a ² has it will have twice because it's a number squared. So a ² can only contain an even numbers of 3 s in its prime factors and 3b ² can only contain an odd numbers of 3 s. This means that a ² and 3b ² are never going to match, and an equilateral arrangements made from yellow triangles is never going to match an equilateral arrangements made from green triangles

This is great reasoning, but how do we know that replacing each equilateral space with three green triangles is the only way to build up to an equilateral triangle ?We hope you enjoy the brain-stretching this kind of reasoning involves.Be encouraged, students a lot older than Stage 4 still wrestle with this sort of thinking.