While still very young, some people experience a special day when mathematics becomes an important part of their lives. For some of us, something might happen that makes us realise that we really like mathematics, or that we discover that we are good at it; but for a 12 year old boy called Fibonacci (say it Fib-o-narchee) back in 1183 AD, it was a day on which he made three wishes that changed his life.

Fibonacci went with his merchant father to visit a building site in Pisa, Italy, where a huge round tower was being built. While his father was talking to the architect, Fibonacci watched a young man sailing gracefully on the river, and wished he could have his own sailing boat (First wish!). The young man was the architect's assistant, and Fibonacci told him that he thought the tower would start to lean over and might fall down because they were building it on an old swamp. The man laughed and called Fibonacci a `blockhead'! Then he challenged Fibonacci to work 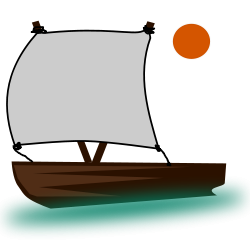 out the cost of building materials his father was bringing. Fibonacci was very embarrassed by how much faster the young man could calculate the answer on his abacus. So, his second wish was that one day he would beat this man in a mathematics race. The man further insulted Fibonacci by telling him to go away because he had someone important coming to see him. Fibonacci's third wish was that one day he would be so clever that the Emperor would want to meet him.

Later that same year, something else happened that would help Fibonacci's wishes come true. His father took him on a sea voyage to northern Africa, where he met a clever 10 year old Moorish girl. One day they had to work out the cost of 23 ox hides at 18 denarii each. Fibonacci, who only knew Roman numerals, had to work this out, step by step on his abacus. (XXIII times XVIII)

But the girl had the answer in a flash using nothing! (How do you think she did it?) Fibonacci was amazed and asked the girl to teach him the Hindu-Arabic number system that she used. (This is what we use today.) This new type of mathematics allowed Fibonacci to work things out in his head. He also learnt how to write down difficult calculations on paper using place value and work out the answers quickly.

Several months later, Fibonacci and his father delivered some building material to Pisa and met the architect's assistant again, and the cost of materials had to be calculated. Can you guess what happened? Yes! The young man was beaten in a maths race by a blockhead!

So that was one of Fibonacci's wishes come true, but what about the other two? To find out you will have to read the rest of the story.