Peter wanted to make two pies for a party. His mother had a recipe for him to use. However, she always made 80 pies at a time. Did Peter have enough ingredients to make two pumpkin pies?

Sam's grandmother has an old recipe for cherry buns. She has enough mixture to put 45 grams in each of 12 paper cake cases. What was the weight of one egg?

A 750 ml bottle of concentrated orange squash is enough to make fifteen 250 ml glasses of diluted orange drink. How much water is needed to make 10 litres of this drink?

The Tree and the Greenhouse

The Tree and the Greenhouse 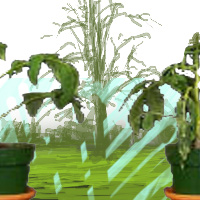 Mum, Dad and their two children, Emily and Isabel, moved into a new house. At the end of the lawn was a big tree which had a disease and was dying.

Mum said she wanted to cut the tree down before it fell down.

Dad said, "How do we know we won't hit the greenhouse?"

Mum answered," We'll measure the lawn and find out how tall the tree is!"

"How?!!" Dad, Emily and Isabel all exclaimed.

Emily measured the distance from the tree to the greenhouse with her metre ruler.

"Now measure the shadow of the tree, you two, and make it fairly accurate!"

Emily and Dad measured the tree's shadow. Mum and Isabel pushed the end of the bamboo cane into the ground so that exactly a metre stuck out.

"Now," said Mum, "we'll measure the shadow of this cane and then we will be able to work out the height of the tree."

"It's OK," Mum announced, "it won't reach the greenhouse!"

How tall was the tree?

This problem will encourage children to draw diagrams and mark measurements on them in the process of solving the problem.

Would it be a good idea to draw a diagram of the tree and its shadow, and the stick and its shadow?
Would using a calculator help you?

Learners could try Hello Again which is a Stage 3 problem.

Suggest starting by drawing a diagram of the tree and its shadow, and the stick and its shadow. Alternatively, learners could try Once upon a time which is a similar, but easier, problem.