Here is a picnic that Petros and Michael are going to share equally. 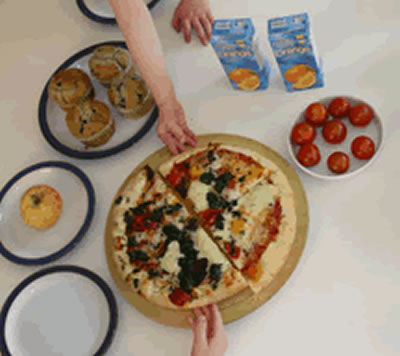 Can you tell us what each of them will have?

In this problem, the familiar context of sharing provides an opportunity in which to explore fractions in a variety of ways. The task involves finding fractional quantities of whole numbers as well as dividing a unit into equal pieces.
You may be interested in this report, originally published on the NCETM website. It outlines a collaborative project between six primary schools, intended to develop fluency and understanding of fractions through rich mathematical tasks. All participating schools used this Fair Feast task with their learners. (The two appendices can be found here and here.)

You may want to create your own 'picnic' consisting of empty boxes and cartons, or the real thing. Alternatively, the problem could be introduced by displaying the photo on the board. No matter how you present the food to be shared, you could contextualise the picnic by telling a 'story' to your class.
Allowing learners to talk, perhaps in pairs, about the solution will give them a chance to articulate what they know about halving. Walking around the room listening to their discussions may be a good assessment opportunity for you.
When you come to talking about the solution as a whole class, it would be helpful to be able to physically share the picnic, if using real food or models. If you're using the photograph, it would be good to be able to annotate it, for example on the interactive whiteboard, so children could come up and group/split the images of the items. Encourage pupils to explain how they know each part of the picnic has been shared equally, listening out for responses which refer to the two parts being exactly the same. You can discuss different ways of describing the share of pizza - two slices, two quarters, one half ...

How many/much of these/this is there altogether?
How would we share that fairly between two?

What would happen if the picnic was split between four children instead of two? Are there other numbers of children that it would be easy to split the picnic for?

Some pairs might find it easier to have a print out of the photo to work from. Having items to share physically will make this problem more accessible.
The NRICH Project aims to enrich the mathematical experiences of all learners. To support this aim, members of the NRICH team work in a wide range of capacities, including providing professional development for teachers wishing to embed rich mathematical tasks into everyday classroom practice.