We had a quite a few submissions for this task that involved using a range of problem-solving skills.

Isaac from North Molton Primary School send in his observations:

So, the woman put three cards on each pile and asked another woman to look at the bottom of any pile. She chose the middle pile. Then the woman doing the trick put the the 10 of diamonds card as the 3rd card. Then she shuffles the deck round and says "Six of diamonds magic". That sentence has exactly 18 letters in it, 18 is also a multiple of 3 so she had shuffled the deck round six times to get to the 10 of diamonds card which was the other lady's card.

It takes practice though to perfect it.

Noa and Scarlett from Eden Primary”¨ School sorted out a sequence they believed was involved:-

The card's position in the pack is always the same number away from the front. The sequence is 3rd, 7th, 5th, 5th. It always starts in the third position.

It also works with any other word followed by 'of' then the name of a type of card. We tried this out with hummus of diamonds, falafel of spades and card of hearts. The trick worked on all three of these words. It only works in words with 3-9 letters. With two letter words, the sequence is 1st, 9th, 1st. With one letter, the sequence is 2nd, 8th, 2nd which is why these don't work. 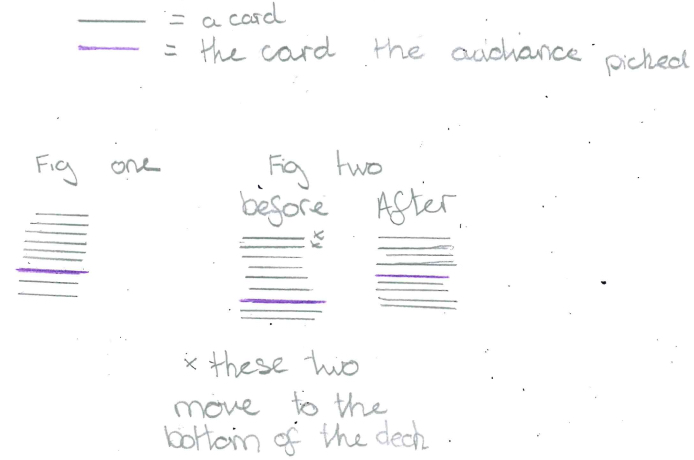 Sycamore Class from Wensum Junior School wrote about their findings:

We worked out that you need to make sure that the pile your volunteer picks is always put at the top. This makes their card the 3rd one in the pile.

It doesn't work if you increase the number of cards e.g. if you increase it to four cards per pile, then the card may not be dealt on the first round as it will be 4th in the pile.

Person A - participant
Person B - magician (this trick is not magic)

The first step to this trick is to sort the cards into three piles of three (done by Person B). When Person A chooses a pile, Person B places that pile on top of all the others when collecting the cards. The card Person A has seen is now in the 3rd position because when they pick up the pile their card is at the bottom so when Person B places them face-down it's the third card in the pile.

Person B will now ask Person A to lie or tell the truth about what their card was. It does not affect the outcome of the trick whether Person A lies or tells the truth.

For example: Person A sees the card Ace of Hearts but chooses to lie and say Jack of Clubs. When Person B spells out the word “Jack”, they place “J”, then “A”, then “C” (the third card which is Person A's card). The “K” is the final card to be put down when spelling this word. You place these cards at the bottom of the pile and Person A's card is now at position seven because there are two cards before it (“J” and “A”). It doesn't matter how many cards are placed after it because the smallest amount of letter possible on the first word is three so there are two letters before Person A's card.

Next you spell out either “hearts”, “diamonds”, “clubs” or “spades”. There are always going to be four cards in front of Person A's card. This will bring it back to the 5th position. When you spell “magic” the “C” is the fifth letter and Person A's card is in the fifth place. When Person B reveals the letter “C” from the word “magic” they reveal the Ace of Hearts and tell Person A they were lying. This is not a magic trick, this is just a very complicated bit of maths.

Thank you all for the solutions you sent in. Perhaps you could create a different version of this 'trick'? If so, please send it in.
The NRICH Project aims to enrich the mathematical experiences of all learners. To support this aim, members of the NRICH team work in a wide range of capacities, including providing professional development for teachers wishing to embed rich mathematical tasks into everyday classroom practice.