Using everyday language to compare objects and to solve problems

Children often enjoy combining block play with small world items and talking about what they have made. Later this may include planning what they will make and telling a 'story' about what is happening in their 'house' or 'boat', for example.

Adults could provide photographs or images of completed patterns or arrangements of toys to copy for themselves (in block play, pattern blocks, mosaic tiles or coloured cubes for example).
The Activity
Each player needs the same small collection of blocks and small world toys. One player (the Builder) creates an arrangement with their toys. The Builder tells a second player (the Maker) how to make their arrangement exactly the same. Swap roles.
Once this idea is understood, introduce a 'barrier' such as an upstanding book, to hide what the Builder is making from the Maker. The Maker has to create the same arrangement without seeing it (you could offer a glimpse to begin with), which encourages use of precise vocabulary.

Describing
What do you notice about these two collections? Are you sure you both have exactly the same collection to start? How do you know?
What is the same? What is different?
Reasoning
How did you decide to place that (piece) there? What did you hear Ivy say to make you place that there?... that way around? What words helped you know where to put it?
Are the two exactly the same? Are you sure? How do you know?
What if... we turn that one around? Or move it next to the cow?
Which positions are the most tricky to describe? What makes an arrangement easier or harder?
Opening Out
What if … we try this with Pattern Blocks? … mosaic tiles? … big blocks/boxes outside?
What if … we try playing this with one Builder and a group of friends as Makers?
What if … we try this without using a specific word (e.g. 'behind')
Recording
Take photographs of the arrangements to discuss and try and re-make.
Provide children with clipboards to draw their arrangement of toys. You might even try drawing the arrangements from a different viewpoint (e.g. what the cow can see). 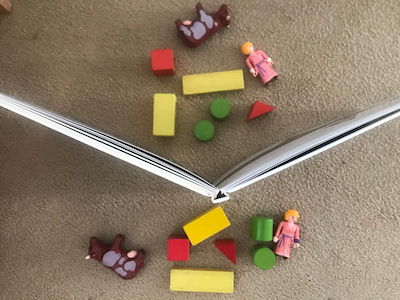 To begin with, two identical small collections of small world toys to make an arrangement and a 'barrier' such as an upstanding book.
Download a PDF of this resource.
Acknowledgement: Helen J. Williams