In June 2018 the government announced a pilot of revised Early Learning Goals (ELGs) for mathematics, which should support children to develop the right building blocks for learning at key stage 1 (DfE, 2017:7). These have caused concern, not least because they omit shape, space and measures, along with problem solving. However, they do reflect some of the latest research in early maths learning, including pattern. Since a recent focus on number sense has diverted attention from shape, space and measures learning, perhaps it is time to reconsider what those mathematical building blocks should be. As the Goals should provide a basis for all 5 year olds at the start of year one, and will inevitably influence the curriculum, this also means considering what is important and appropriate learning for four year olds in reception classes.

The pilot Goals are:
Number:
Children at the expected level of development will:  Numerical Patterns:
Children at the expected level of development will: According to research, understanding numbers to 10, especially linking numeral values and counting order, is a key predictor for later mathematics achievement (Lyons et al, 2014). In contrast, the current Goals include expectations about numbers to 20, adding and subtracting by counting on and back, and solving doubling and halving problems, none of which are supported by research (Gifford, 2014). Subitising (recognising a number of things without counting) supports number understanding in visual and practical ways. Using number bonds is more effective than counting strategies for later arithmetic. However, Automatically recall number bonds suggests recitation of abstract facts and quick-fire testing, which are likely to produce superficial learning and pressurise both children and teachers. This wording seems unnecessary, since children can learn number combinations easily and practically with fingers, dice and ten frame images. This is 'conceptual subitising' where children recognise a total as a combination of subgroups, such as seeing 6 fingers as 5 and 1. Sarama and Clements (2009) suggest assessing instant recall with practical hidden number problems like, '10 pennies altogether - here are 3 in this hand, how many are hidden in my other hand?' which also show understanding. However, knowing number combinations for 10 is an unlikely target for the just-five year olds in reception. 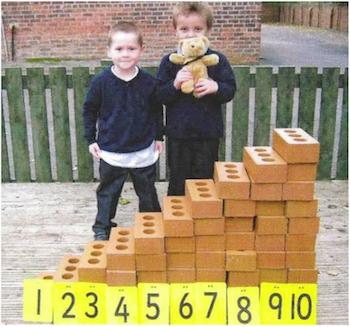 Photo from Ofsted publication 'Mathematics: made to measure' May 2012, p 61

The Numerical Patterns Goal is a strange mixture of items. It is good to see explore patterns, as there is no exploration in the current Numbers Goal. Hopefully this refers to visual patterns and conceptual subitising of numbers within numbers, but, along with doubles facts and comparing numbers of objects, all this seems to belong with Number.  This new emphasis on pattern may reflect recent research identifying pattern awareness as a significant predictor of later mathematical progress (Rittle-Johnson et al, 2016).  However, the predictive indicators were spatial, such as identifying the unit of repeat in patterns of objects, which encourages children to count groups as units. Presumably, repeating patterns were excluded because they were spatial. A key omission in this Goal is not mentioning that number patterns should be visual, such as the 'staircase pattern' going up in ones and the alternating pattern of 'sticky-out' shapes with odd and even Numicon numbers. Patterns in abstract number symbols are more appropriate for seven year olds. Moreover, an engaging aspect of patterns is that they are not just about number, but exist in a range of modes, including movement, sounds, time, art, language and stories: they provide access to mathematics though a range of other areas of learning. Analysing 'what is the same and what is different?' when copying or creating patterns, and identifying repetition and regularity, encourages children to become 'pattern sniffers' throughout mathematics (see the NRICH article Developing Pattern Awareness with Young Children).

The rejection of a Shape, Space and Measures Goal is serious when considering building blocks for future mathematics. Spatial thinking is important, according to Sarama and Clements (2009): most high achievers in mathematics have strong spatial skills, including being able to represent ideas spatially. Geometry links to other disciplines and occupations such as science, engineering, art and design. A key spatial skill is visualising the effect of rotating objects, which seems related to experiences of manoeuvring in space and construction activities. However, some groups, such as girls, are less likely to gain these experiences at home (Clement and Sarama, 2009): if not valued in assessment, teachers will feel less able to prioritise structured provision for disadvantaged groups.

Similarly, early experiences of measures underpin later learning. Young children find units of measurement hard to understand, as they first need to understand what attribute is being measured, especially if they are invisible, like weight and time. Comparing amounts of length or volume help children to understand these attributes and to learn the varied vocabulary involved. They experience equivalence when finding things of equal length or balancing weights, and thereby can gain understanding which supports algebraic thinking. Measures provide contexts for applying numerical concepts, when counting things to fill a jar or balance scales, and also when finding fractions practically to share playdough or lemonade. Children recognise numerals on measuring tools such as height charts, scales, clocks and calendars. Measures are also important building blocks because they help link mathematics to the adult world through practical experiences, which are accessible and motivating to young children.

However, the current Shape, Space and Measures Goal's emphasis on language perhaps detracts attention away from mathematical activity and learning:


children use everyday language to talk about size, weight, capacity, position, distance, time and money to compare quantities and objects and to solve problems. They recognise, create and describe patterns. They explore characteristics of everyday objects and shapes and use mathematical language to describe them.
The Early Childhood Mathematics Group (ECMG) recently proposed alternative Goals, which include pattern and problem solving as part of number as well as shape and space, and emphasise children communicating in a range of ways.
ECMG proposed Numbers Goal
With numbers to 12, children count out a number of items from a larger group, match numerals to amounts, compare and estimate numbers, predict adding or taking one. Children recognise a number of items without counting (up to 5) and recognise how numbers are made up of other numbers.
They notice, copy, continue and create patterns.
They solve practical problems including: adding, subtracting and sharing.
Children communicate their mathematical thinking in a range of ways.

ECMG proposed Shape, space and measures
Children make comparisons in relation to size, length, weight, capacity, time, money and position.
They explore characteristics of everyday objects and shapes, including making constructions and pictures.
They notice, copy, continue and create patterns.
They solve problems and communicate their mathematical thinking in a range of ways.
Problem solving is perhaps the most serious omission from the proposed Goal. Although it can be harder to observe than language use, it is too important a part of young children's mathematical learning to omit. This is evident in the Characteristics of Effective Learning, which focus on problem solving and were highlighted by Ofsted's training for mathematics inspections (Ofsted, 2013:3). Problem solving encourages children to make connections and use their knowledge flexibly, reasoning and generalising understanding to different contexts. Shape, space and measures provide opportunities for reasoning in practical ways, for instance by using available shapes to represent an elephant or build a den, creating a pattern with a rule and realising that fewer larger jugs will fill a bowl.

A notable addition in the ECMG's proposal is communication in a range of ways: Children learn by making sense of mathematics and by constructing networks of understanding. Encouraging them to find their own ways of expressing what they have learned, practically or verbally, through gesture, drawing, symbolising and writing, allows them to make these connections, communicate with others and so deepen their understanding (see the NRICH article Children's Thinking and some examples of children's thinking. A repertoire of ways of communicating mathematics is a source of creativity which is currently the missing building block for mathematical learning.

Gifford, S. (2014) 'A good foundation for number learning for five year olds:  an evaluation of the English Early Learning Numbers Goal in the light of research'. Research in Mathematics Education 16 (3) 219-233