Recent research has found that young children's ability to spot mathematical patterns can predict later mathematical achievement, more than other abilities such as counting (Rittle-Johnson et al, 2016). Research has also found that pattern awareness can vary a great deal between individuals: we have all noticed children who arrange objects in radial patterns or make constructions with reflective symmetry, while others pay no attention to pattern at all. 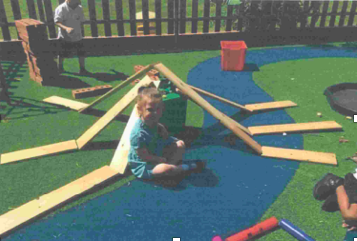 What is mathematical pattern awareness? Patterns are basically relationships with some kind of regularity between the elements. In the early years, Papic et al (2011) suggest there are three main kinds:

Children who are highly pattern aware can spot this kind of regularity: they can reproduce patterns and predict how they will continue.

Why is pattern awareness important?
Spotting underlying patterns is important for identifying many different kinds of mathematical relationships.  It underpins memorization of the counting sequence and understanding number operations, for instance recognizing that if you add numbers in a different order their total stays the same. Pattern awareness has been described as early algebraic thinking, which involves: (Blanton et al. cited by Kieran, Pang, Schifter & Ng, 2016).

The activity Pattern Making focuses on repeating patterns and suggests some engaging ways of developing pattern awareness, with prompts for considering children's responses. Children can make 'trains' with assorted toys, make patterns with twigs and leaves outside or create printing and sticking patterns in design activities.

It is important to introduce children to a variety of repeating patterns, progressing from ABC and ABB to ABBC. In the past we have tended to emphasise alternating AB patterns with young children: however this can result in some children thinking that 'blue, red, red' can't make a pattern. They say things like, 'That's not a pattern”¦ because you can't have two of the same colour next to each other' (Papic et al, 2011).

Copying patterns is important, according to Papic et al (2011), who suggest that the subsequent conversation between teacher and child, comparing their construction with the original pattern, is crucial to developing pattern awareness. It helps them to focus on 'What is the same and what is different?' and to see the underlying pattern structure. Some young children will find this difficult, while others can replicate the pattern using different colours or objects. 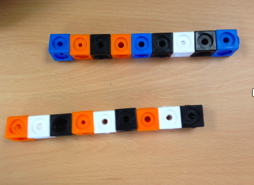 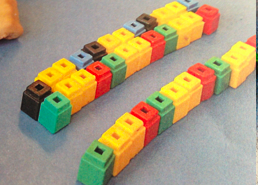 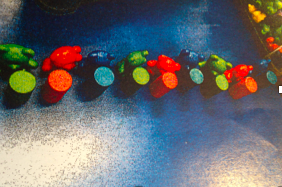 Some children will copy a pattern successfully, but one cube at a time, and are unable to continue it. Those who isolate the 'unit of repeat' in an AB pattern may continue the pattern by picking up a red and a blue cube together. The significance of identifying the 'unit of repeat' is in seeing a group of objects as one item, which is a sophisticated development for young children. This leads to multiplicative thinking, which involves counting groups instead of single items, as in counting the number of pairs of hands. Recognising the 'unit of repeat' also involves part-whole awareness, in simultaneously seeing the unit as a whole and the items within it. This is important for understanding number composition and seeing numbers as made up of other numbers.

Children who are good at 'pattern spotting' can see the overall structure and identify the pattern rule. When children make their own patterns, a helpful question is, 'What is the rule for your pattern?' or with younger children, 'What is your pattern called?' Children who have understood a pattern structure can translate it to different materials, generalizing the pattern. One five year old, when told his pattern was an ABBC pattern, said,  'So it could be dog, cat, cat, sheep?'

Children can also spot a mistake in pattern and some may instantly see how to repair it, while others may have to start from the beginning to make the correction or make a 'local' adjustment which just moves the error along!

Younger children enjoy making up action patterns, like 'head, shoulders, knees and toes' and delight in spotting errors in the sequence. Five year olds can devise their own ways of recording action patterns, which involves 'translating' the pattern into a different mode, using pictures and symbols. 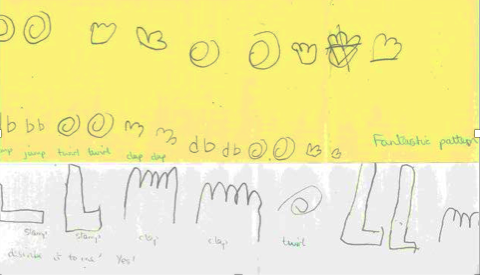 Older children also appreciate growing patterns, like the 'staircase' pattern which underlies traditional stories and rhymes, such as The enormous turnip, The gingerbread man, There was an old woman who swallowed a fly, The twelve days of Christmas and books such as the Hungry Caterpillar and many others. 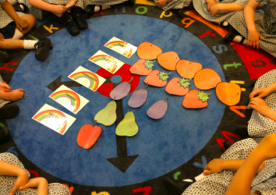 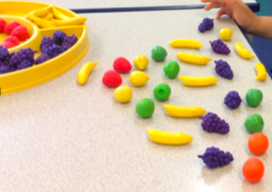 What to look out for in children's responses to challenges.

Copying and continuing the pattern:
Making or drawing pattern from memory (show briefly, then hide all or part): Spotting a mistake and repairing the pattern:
Explaining the pattern:
Making your own pattern with similar or different objects:
Patterns are also an important element of spatial thinking and geometry, for instance with reflective and rotational symmetry. Once children begin to spot patterns they see them everywhere, not only in the environment, but also in daily routines and all kinds of regular behavior. Most important of all, children find pattern activities engaging and so they can help to develop positive attitudes and access to mathematics for all children.