Developing Number Through Tidying Up

This article first appeared in the summer 2012 edition of Primary Mathematics, one of the journals published by The Mathematical Association, and was originally entitled 'Developing Counting Through Play'.  Janine Davenall writes about investigating the development of children's calculating skills in the nursery where she taught as part of an action research project for a Masters course with Sue Gifford.

Zero means no more there!

Developing mathematical thinking in the nursery
It began with a discussion with an LEA advisor who felt calculation could be regularly observed in a Nursery setting during children's play, for instance during role-play in the 'home corner'.  I decided to take photographs of independent play and make narrative observations of child interactions with resources.  I expected to observe children using props from familiar counting songs, counting generally with one to one correspondence and to see some sorting, grouping and matching play, particularly with mathematical equipment.  I felt sure that children who were fluent in English would use language such as 'more' (particularly in relation to snacks), perhaps demonstrating moments of reflection as they shared toys or food with friends and noticed that someone had more than others, or maybe chatting about previous number or grouping experiences.  I expected to hear other vocabularly such as 'lots', 'one', 'too many' and I hoped to find examples of play situations when I would be able to talk with children about the cardinal value of numbers.

Mair, Peter and Julian were playing together.  Mair had arranged plastic animals into a sorting tray, placing one in each section.  She could have been exploring the mathematical idea of one to one correspondence, but she could also have been exploring an enclosing schema.  Mair was at the early stages of develping English and as I watched and showed an interest in her play, she chatted happily to me in Bulgarian.  Although she knew number names in English, these were not a part of her dialogue on this occasion.  However, "Princess!" Princess!" was, which suggests that, at least part of the time her thoughts were very far from mathematical.

Although some mathematical ideas were incorporated into their play, children did not seem to be using opportunities to develop number ideas.  They were not exploring calculating language and concepts, despite my interventions, and the emphasis of their play was often focussed on the exploration of roles and the development of social skills.  This echoed Sue Gifford's comment from her research in early years settings: "children's role-play was concerned with the larger themes of life, like love and power, rather than mundane things" (2005:2).  I began to realise that this observation described behaviours that were taking place in our setting.

Colleagues and I decided that we would investigate the development of mathematics through independent play.  During a four-day week we flooded our environment with activities that could potentially lend themselves to number and calculating ideas.  In order to identify when, where and how often children engaged with friends in mathematical ideas, we agreed to keep an event sample of mathematical incidents, both inside the classroom and outside in our garden area.  Despite this huge input we noted a total of just 57 incidents relating to the mathematics area of the Early Years Foundation Stage (DfES 2007), 37 of which held possible reference to number and calculation ideas.  Comments represented just 17 children out of 52 children in the class.  This activity highlighted how few incidents took place, how inconsistent they were between children and how fleeting mathematical involvement was without adult intervention.

Sue Gifford had concluded that: "children were unlikely to learn about number through independent play ... a laissez-faire approach to children learning maths in the 'secret garden of play' does not work.  Opportunities may be there, but children will not necessarily take advantage of them" (2005:2).  From a later review of research, she summarised: "Many children do not focus on mathematical aspects of play and neither do many practitioners. What seem to be effective are adult-led, mathematics focused, group activities with adults actively teaching" (2008:212). These observations seem to me to run counter to most current early years pedagogy and national guildelines.  For instance, the Independent Review of Mathematics Teaching in Early Years Settings and Primary Schools regretted that although "[t]he EYFS provides guidance on developing 'mathematical understanding through ... imaginative play' ... opportunities in this area seem to be missed" (Williams, 2008:36).

One problem with mathematics, identified by Pound, is the attitude towards it of may early years practitioners: "many of the adults who work with young children lack confidence in their own abilities in this area of the curriculum ...  This lack of confidence can lead practitioners to over-formalize and fail to pick up on informal opportunities to develop mathematical understanding" (2006:125).  The range of training, experience and understanding of each curriculum area varies enormously between practitioners.  I fear that without planned vocabulary and stated expectations of possible mathematical ideas to be gained from some activities, then opportunties for learning will be missed and misunderstood.  Sue Gifford pointed out, "[f]or adults to intervene mathematically, they need to be clear about learning intentions and assessment indicators, possible difficulties and support strategies, challenges and extensions.  Unless these are recorded, practitioners can become confused about the aims of provision" (2005:65).  The recent statutory time changes in our nursery class had resulted in a reduction of time for colleagues to meet and discuss individual progress and development.  I feel that if possible outcomes, focus questions and language are not thought through then understanding of how to introduce ideas and develop language could become confused.  These discussions are important in order to build staff confidence in identifying the mathematics they are helping children to learn.

The potential for calculating and problem solving opportunities during tidying up time had been revealed by observations.  Colleagues and I therefore agreed to slightly extend the tidying up period so that we could differentiate discussions with small groups or individuals and use this time to explicitly target the development of number and calculating skills.  In this way an individualised provision was offered within a meaningful context of collecting up resources.  A 'check point' (number line) was painted outside on the playground floor, which was incredibly successful and encouraged children while collecting resources, to match one to one and compare the quantities of different groups. 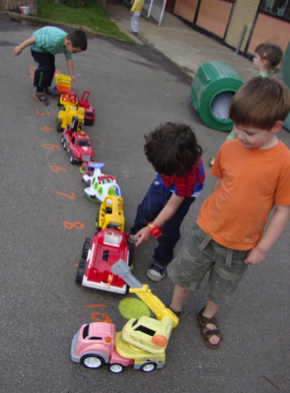 The check point has allowed us to purposefully discuss the 'stopping number', how many more are needed and what the total will be when two quantities are added together.  The 'one more than' relationship between numbers has been clearly exemplified through these practical real life situations and children have supported each other in extending their knowledge and understanding of number.  For instance, Amjit, Leah and Delroy were collecting up trucks at tidying up time.  They collaborated in putting them onto individual 'check point' spots.  "How many do you have?" I asked.  They took it in turns to count, matching one to one, to eight.  "We need two more," called Leah and their search continued.  When the two missing trucks were recovered each child checked that there were ten.  Amjit counted backwards from ten, touching each vehicle as he counted, to zero.  "Haha," he said, "zero means no more there!"

Other tidying up time examples of children's language
Ola and Tania were collecting up balls.  I told them that the stopping number was 6 today and placed a stick by the sixth spot.  Ola did not yet control number order.  She found two balls and matched 1:1 to two but named them three, four.  Tania corrected her.  Tania placed three more balls on the spots.  She counted to five and Ola copied her.  "Yes," said Ola, "we need one more" and ran off to find it.

I asked Amilla to collect up the fat felt pens.  She asked me what the number on the pot said and I told her that it was 20.  She took a long time collecting and counting up the pens.  Several times when she stopped she held the last number that she had counted in her head.  Once I gave her 11 and another time 14 and on both occasions she counted on, continuing to match to 1:1.

I asked Ayse to collect up the ten rolling pins.  She checked and rechecked as she gathered them up.  She then organised them into groups of eight and two.  "Look," she said "that's how you know it makes ten."

Nicolas joined Mohammed who was collecting up name cards from the board to put them away at the end of the day.  I asked how many friends had come to play that day.  Supported by Nicolas he counted 21 cards.  I said that was funny as it should have been 22 cards.  "We need to look for one more," said Nicolas.  "Yes, one more," agreed Mohammed.

Collecting up scissors Rahim said "we need to find six altogether ... see it says 6 here," he commented, reading the numeral.  "We have three we need to find three more cos three and three makes six you know."  Once all scissors had been retrieved Rahim encouraged his friend Imran to count all the scissors.  "Six," said Imran.

The number of cupfuls of water that it takes to fill a bucket has led to many joyful realisations, such as Zaineb who comments "43!  43!  That means lots and lots!"

These examples demonstrate for me our nursery's heightened involvement in grappling with problems that demand calculating skills and show how calculating and whole number understanding are intertwined in the investigations of young children.

We had developed a model with planned opportunities, which included children being challenged as a group to ensure that they were exposed to the 'big ideas' behind mathematical concepts and that they are (and not just those who were numerate and confident with numbers) engaged in conversations and experiences where these ideas are analysed and connections were made between new ideas and existing knowledge.  The children were now more confident with calculating.  I had found, as Helen Williams suggested, "mathematical thinking develops when a child's thinking is nurtured and further structured through interaction with peers and adults" (Williams, 1996:20).  My development of extended tidying up and 'show and share thinking' times has become a way of ensuring that children's entitlement to access mathematical ideas was not left to chance but was offered to all in my care.

Janine is Early Years Coordinator at an inner-city primary school in London and at the time of writing held the same position in an inner-city London infant school.  Dr Sue Gifford is Principle Lecturer in Mathematics at the University of Roehampton, a member of the Advisory Committee on Mathematics Education (ACME) and she coordinates the Early Years resources on NRICH.

Gifford, S. (2008) 'How do you teach nursery children mathematics? In search of a mathematics pedagogy for the early years', in Thompson, I., ed. Teaching and learning early number, Berkshire: Open University Press