Place Value: the Ten-ness of Ten

Article by Jenni Back

This article builds on Early Number Sense and develops the idea of ten-ness. It encompasses all the ideas within Jenni Way's article Number Sense Series: A Sense of 'Ten' and Place Value, but in addition updates the research in this area.

Introduction
Once children have developed a basic sense of the numbers up to ten (see Early Number Sense), they need to develop a strong 'sense of ten' as a foundation for both place value and mental calculations. (This is not to say that young children will not also have an awareness of much larger numbers. Indeed, there is no reason why children should not explore larger numbers while working in depth on 'ten-ness'.)

A number of different resources have been developed that help to support children's understanding of ten including Numicon and Hungarian number pictures as well as the ten-frames that are used extensively in Singapore, the United States and some other settings.

A sense of ten
Ten-frames are two-by-five rectangular frames into which counters are placed to illustrate numbers less than or equal to ten, and are therefore very useful devices for developing number sense within the context of ten. The use of ten-frames was developed by researchers such as Van de Walle (1988) and Bobis (1988). Various arrangements of counters on the ten-frames can be used to prompt different mental images of numbers and different mental strategies for manipulating these numbers, all in association with the numbers' relationships to ten.

For example, look at the three ten-frames below. What numbers are illustrated? What does the particular arrangement of the counters prompt you to think about the numbers? What can you say about each number's relationship to ten?

Frame B:
Again there are five counters; perhaps seen as three in the top row and two in the bottom, or as four and one, or two and two and one. It is also noticeable that there are five empty boxes remaining, in a similar shape to the full boxes. This prompts the awareness that 'five and five make ten'.

Frame C:
This arrangement strongly illustrates the idea that 'five and five make ten'. It also suggests the idea that half of ten is five. This type of thinking would not occur if the five counters were presented without the context of the ten-frame.

Plenty of activities with ten-frames will enable children to think automatically of numbers less than ten in terms of their relationship to ten, and to build a sound knowledge of the basic addition/subtraction facts for ten which are an integral part of mental calculation. For example, a six-year-old child, when shown the following ten-frame, immediately said, "There's eight because two are missing."

This child had a strong sense of ten and its subgroups and was assisted by the frame of reference provided by the ten-frame. Once this type of thinking is established, the ten-frame is no longer needed. Although dealing with whole numbers initially, the 'part-part-whole' thinking about numbers supports the understanding of fractions, in particular tenths.

Similar activities can also be used with the Hungarian number picture and Numicon with similar effect and it can be very helpful to ask children to work with different representations and then explore what is the same and what is different about them.

Place value
'Ten' is of course the building block of our base 10 numeration system. Young children can usually 'read' two-digit numbers long before they understand the effect the placement of each digit has on its numerical value. For example, a 5 year-old might be able to correctly read 62 as sixty-two and 26 as twenty-six, and even know which number is larger, without understanding why the numbers are of differing values.

Ten-frames can provide a first step into understanding two-digit numbers simply by the introduction of a second frame. Placing the second frame to the left of the first frame, and later introducing digit cards, will further assist the development of place value understanding. Additional frames full of ten counters can be used to show numbers over 19 so that children develop mental images of numbers based on their experiences with these resources. Once again a similar approach with Cuisenaire rods, Numicon or Hungarian number pictures would be equally appropriate. See below for the image of 13 shown as one full ten frame and an additional frame to its right with 3 counters on it. 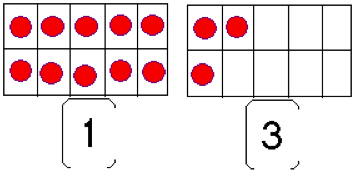 In the English language we do have something of a problem with our teen numbers which can cause difficulties for our learners in that the number name reverses the order of the digits when written: saying thirteen and writing 13 seems the wrong way round for many. To overcome this obstacle I find it helpful to use the names onety one, onety two, onety three ”¦ for 11, 12, 13 ”¦ in a playful way to draw attention to the structure of the tens digit coming first when the number is written in symbolic form. Paying attention to structure at this early stage can be very helpful to children's mathematical development: as Gattegno said 'only awareness is educable' (1988).

For more details about what we as teachers can do to support learners' number sense and place value, including a range of classroom activities, see our related article and our Number Sense and Place Value Feature.

The article Place Value as a Building Block for Developing Fluency in the Calculation Process follows on from this one.