Katie and Will have some balloons, some are red and some are blue. 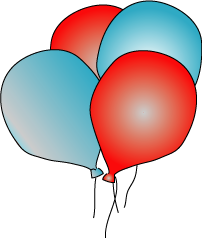 First, Katie blew up a red one. After her first puff her balloon had a circumference of $24$ cm.

Next, Will blew up a blue balloon. After his first puff his balloon had a circumference of $14$ cm.

His balloon burst at exactly the same size as Katie's at the beginning of a puff.

How many puffs had Will done before his balloon burst?