Introduction:
The teacher and the school wanted to explore how children, girls in particular, could be motivated in Maths through a more practical approach. This came about as a result of data analysis and a general observation about the lack of confidence many girls showed in Maths. The levels at the end of KS1 and Y4 were as follows: 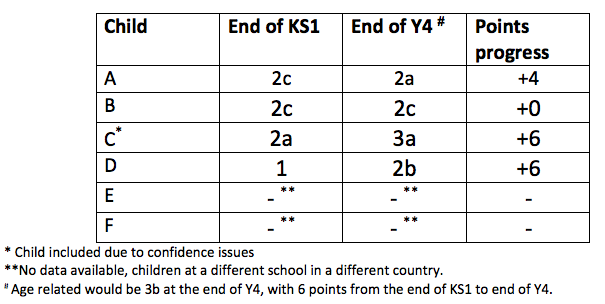 Following the early identification of the girls and their levels, research was also carried out regarding girls and performance and attitudes towards maths.
The project focused on teaching a Y5 class using a combination of strategies best suited to the class and teacher’s needs. These entailed the use NRICH activities, use of pre-exposure, which is when children have the opportunity to familiarise themselves with vocabulary and basic concepts prior to the main lesson, Bloom's style of questioning and extended thinking time.

As a consequence of this research project, the girls’ attitude has shown a positive shift, this has also been reflected in some girls’ end of year attainment.

The teacher used pupil voice and interviews to measure pupil feelings about maths and gain feedback from pupils, with the initial pupil voice being videoed to gain a greater depth of understanding. The pupil voice was carried out at both the start and end of the project. Pupils' end of Y4 and end of Y5 levelling data was also used as a measure of impact.

As a result, the teacher is hoping to team teach or observe other teachers to widen and develop the work undertaken.

Project focus and school history:
Holywell Primary School is a transforming, two form entry primary school on the Holywell Estate in Watford, Hertfordshire. It currently has 363 pupils on roll (July 2012) and this number is steadily rising.  Data analysis had shown that girls are on par with boys in KS1 but then fall behind boys by the end of KS2, resulting in higher numbers of boys than girls achieving L5 at KS2.

The project focused on all six girls in one of the Year 5 classes.  The pupil voice included translations of key words due to two of the girls having significant EAL issues. The pupil voice showed that although the children liked maths they did not think they were good at it especially calculations with numbers and problem solving.  Some found the process of solving problems challenging. Confidence was generally low. The teacher said, ‘One of the girls even said that Maths is for boys ... and she went on to talk about how hard and unpleasant she found it.’

The teacher therefore decided to focus on the use of NRICH practical activities and pre-exposure. During the research phase, the teacher also found an article relating to the use of Bloom's Taxonomy in Maths (see Appendix.doc for full reference). This lent itself well as an addition to the project, as the teacher had already started her own development in this field and research also showed it could be beneficial. Boaler (2009), one of many, identifies the importance of questioning as it helps children to explain their mathematical thinking, make sense of what they see and most importantly apply reasoning to their problem solving.

The teacher planned in opportunities for practical problem solving maths which was matched to the objectives and skills for the session - this was done through the use of the NRICH curriculum map to the objectives being taught. In addition to this the girls working below age-related expectations (ARE) took part in pre-exposure with either the teacher or teaching assistant. The teacher tightened her use of Bloom’s style of questioning and also trained the children to use it to ask and answer questions.

Final impact was judged on end of year 5 results and a repeat of the pupil voice.

Project reflection:
The progress of the children for the year can be seen on the school distribution sheet for Maths however their progress has been surmised below.

EAL was a significant issue as all the children fell into this category. However, as it can be seen, all children made progress, with most attainment made by Child C.


The tables below compare the pupil voice responses before and after the project.  Each pupil survey question had a scale of 1-5, with 1= the most negative response and 5= the most positive. The children were asked to score themselves along the gradient and this was repeated at the end with a colour pencil to show any differences.

This study shows that the greatest impact was on the children’s attitude towards Maths whereby all, bar Child A, felt more equipped to take part in Maths, especially in whole class situations.

As it can be seen Child D and Child B have made the most marked change in their attitude in Maths. Child C had already shown signs of change prior to the start of the NRICH project due to the teacher’s work on Bloom’s and changing this child’s previously negative attitude (‘Maths is for boys’) and therefore didn’t show as much change as some of the others.

Many also stated that they were ‘not scared anymore’ and they enjoyed Maths ‘especially the games’.  Child A continues to be a concern for the teacher and confidence building will need to continue for this child next year.  She did nonetheless, show some progress in attitude, this occurred in areas regarding positivity towards Maths (Q4) and the ability to explain ideas (Q5).

Child E and Child F have both shown some progress however a lot of the issues surround the acquisition of the English language and technical maths vocabulary.

Furthermore, upon carrying out the exit interview with the children, the following statements were made:

Child E- Start of Y5 (Maths) was scary, now I can do everything so I’m confident.

Child B- I’m more confident now, I can do things.

Child A however still felt that if she couldn’t do something then her attitude was, ‘I want the teacher to do it’.

The practical aspect of the NRICH activities amongst the other strategies of pre-exposure and thinking time has helped to raise most of the girls’ confidence and enjoyment of maths. One child however has shown no significant change in attitude and motivation. This child when interviewed within the group by the Specialist Leader in Education (SLE) supporting the project, displayed global lack of motivation and confidence issues. The teacher is aware of these issues however they appear to be much more significant and deeper than first thought and may need other professional intervention.

The teacher found the curriculum map in particular to be an invaluable resource in planning the activities and targeting the correct objectives. It is a resource the teacher feels confident she will use again and encourage others to use.

The practical and investigative activities allowed the girls to have a sense of connection between theory and practice and they were given opportunities to work together allowing them to move out of their comfort zone with the support of a peer to act as a sounding board and scaffold. It provided the teacher and the girls with a more flexible and creative approach to maths, it also encouraged all the children to make links between maths and problem-solving skills, extending and challenging the children within their own abilities. All of these are summarised by Brizendine findings described in The Elephant In The Classroom (Boaler 2009), who encourages the use of ‘... more communication and [making] more connections with people’ as females prefer to learn in such a manner.

Pre-exposure had a positive effect too, the girls became more confident and took on active roles in the lessons. It put them in a stronger position or on a level playing field with their male counterparts during the introductions to lessons thereby empowering them and encouraging them to ask and answer question during whole class teaching, this was also observed by the SLE during one of the class observations. Pre-exposure gave the girls an opportunity to discuss and ask questions, in what they then viewed as a less threatening situation. Many findings have highlighted the importance of discussions as it leads to a higher level of thinking, a deeper understanding of what is being learnt and the formation of connections between ideas in Maths. This leads children to view Maths as a whole, rather than individual strands.

Questioning was continually used with boys and girls throughout the project. The use of open-ended questions and encouraging the children to formulate their own questions took away the fear of answering or being asked questions. This developed a deeper level of understanding of questioning and the learning content. Furthermore, it provided the children with a vehicle to challenge each other and take ownership of their own learning.

Other everyday strategies, such as; use of praise, pitch and expectation questions, talking partners and groupings, etc,  will have inevitably played a role in the children’s progress however these were not foci for the project.

Next steps:
The next steps for the project split into two areas, one area will focus on the cohort of children and the other on the impact of the project on the whole school teaching of maths.

The next step for the cohort of children will be to continue embedding the use of practical maths, pre-exposure and use of Bloom's questioning, thereby continuing to develop the children’s confidence, motivation and attainment in Maths. The work of the SLE is also planned to continue.

In terms of the consequences for the school, the intention would be for the project teacher to continue the project with the next cohort of Y5 and also expand it to the parallel class of year 5s and other Y6 class, with the support of the Head teacher and targeted members of staff. Once it is underway, other teachers should be invited to observe and assess the use of such methods and activities in each other’s classes, it would also be beneficial to have a whole staff discussion on girls’ attitudes in Maths to assess future steps and reoccurring trends. This would aid identification of the best possible time in the school year for intervention.

The teacher’s own interests lie with furthering her knowledge of Maths and the use of short, thinking ‘outside the box’ activities and technology, this could therefore be a potential next step for the project teacher’s professional development.

See Appendix.doc for references and details of the pupil voice questionnaire.


This article was published in July 2013.
The NRICH Project aims to enrich the mathematical experiences of all learners. To support this aim, members of the NRICH team work in a wide range of capacities, including providing professional development for teachers wishing to embed rich mathematical tasks into everyday classroom practice.