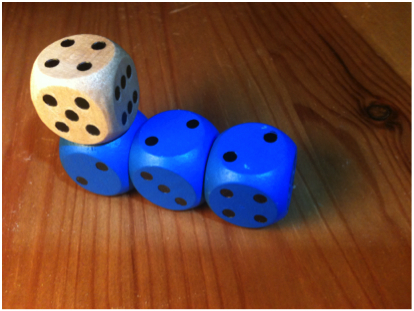 This dice model represents an old blue steam train with a white funnel on the engine at the front. The dice that make up the train are joined using three rules.

RULE 3: Always use four or more dice - so you have at least two 'carriage numbers' to add up.


Obeying all the rules, how many solutions are possible?
You can make models like this one or you could make it longer.
Each one you make is to have the funnel on top of the front dice.

This problem featured in a preliminary round of the Young Mathematicians' Award.
The NRICH Project aims to enrich the mathematical experiences of all learners. To support this aim, members of the NRICH team work in a wide range of capacities, including providing professional development for teachers wishing to embed rich mathematical tasks into everyday classroom practice.