Decathlon: the Art of Scoring Points

The decathlon consists of ten track and field events spread over two days. It is the most physically demanding event for athletes. On day one, the 100m, long jump, shot putt, high jump and 400m are contested. On day two, the competitors face the 110m hurdles, discus, pole vault, javelin and, finally, the 1500m. In order to combine the results of these very different events - some give times and some give distances - a points system has been developed. Each performance is awarded a predetermined number of points according to a set of performance tables. These are added, event by event, and the winner is the athlete with the highest points total after ten events. The women's heptathlon works in exactly the same way but with three fewer events (100m hurdles, high jump, shot, 200m, long jump, javelin and 800m). 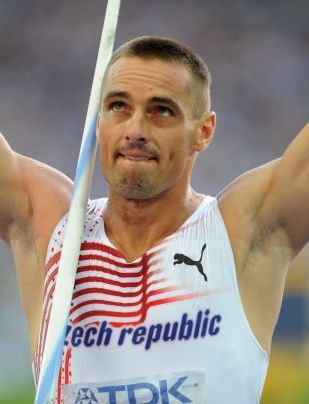 The most striking thing about the decathlon is that the tables giving the number of points awarded for different performances are rather free inventions. Someone decided them first back in 1912 and they have subsequently been updated on different occasions, taking into account performances in all the events by decathletes and specialist competitors. Clearly, working out the fairest points allocation for any running, jumping or throwing performance is crucial and defines the whole nature of the event very sensitively. Britain's Daley Thompson missed breaking the decathlon world record by one point when he won the Olympic Games 1984 but a revision of the scoring tables the following year increased his score slightly and he became the new world record holder retrospectively! The current world record is 9026 points set by Roman Šebrle of the Czech Republic in 2001. For comparison, if you broke the world record in each of the ten individual decathlon events you would score about 12,500 points! The best ten performances ever achieved by anyone during decathlon competitions sum up to a total score of 10,485.

Originally, the points tables were set up so that (approximately) 1000 points would be scored by the world record for each event at the time. But records move on and now, for example, Usain Bolt's world 100m record of 9.58s would score him 1202 decathlon points whereas the fastest 100m ever run in a decathlon is 'only' 10.22s for a points score of 1042. The current world record that would score the highest of all in a decathlon is Jürgen Schult's discus record of 74.08m, which accumulates 1383 points.

All of this suggests some important questions that bring mathematics into play. What would happen if the points tables were changed? What events repay your training investment with the greatest points payoff? And what sort of athlete is going to do best in the decathlon - a runner, a thrower or a jumper?

The decathlon events fall into two categories: running events where the aim is to record the least possible time and throwing or jumping events where the aim is to record the greatest possible distance. The simplest way of scoring this would be record all the throws and jumps distances in metres, multiply them together and then multiply all the running times in seconds together and divide the product of the throws and jumps by the product of the running times, T. The Special Total that results will have units of $(\mathrm{length})^6 \div (\mathrm{time})^4 = \mathrm{m}^6/\rm{s}^4$ and spelt out in full it looks like this:

Interestingly, we see that the second best performance by Dvořák becomes the best using this new scoring system.

In fact, our new scoring system is not a good one. It contains some biases. Since the distances attained and the times recorded are different for the various events you can make a bigger change to the ST score for the same effort. An improvement in the 100m by from 10.6s to 10.5s requires considerable improvement but you don't get much of a reward for it in the ST score. By contrast reducing a slow 1500m run by 10 seconds has a big impact. The events with the room for larger changes have bigger effects on the total. The actual scoring points tables that are used incorporate far more information about comparable athletic performances than the simple ST formula we have invented. 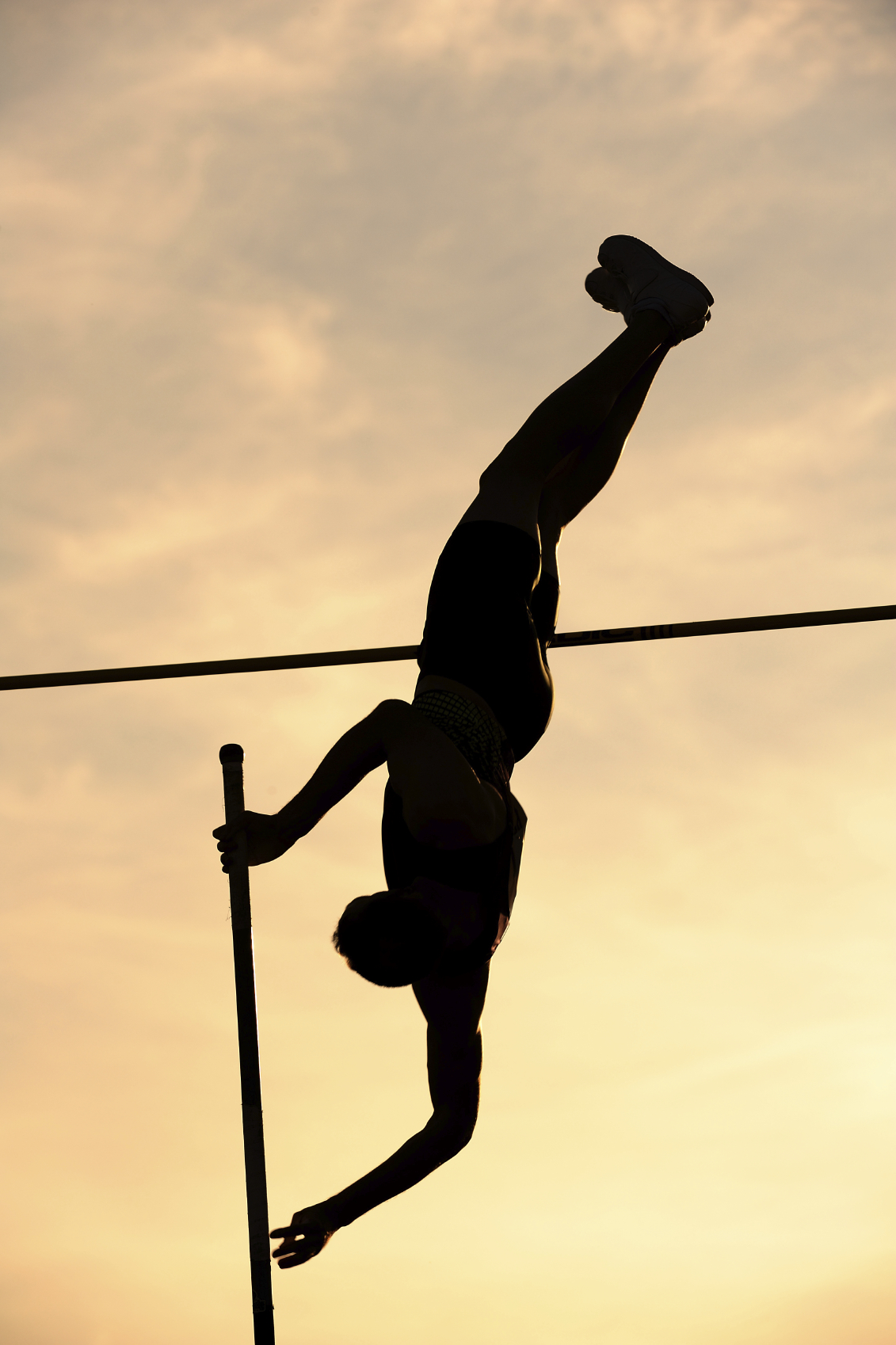 The setting of the points tables that are used in practice is a technical business that has evolved over a long period of time and pays attention to world records, the standards of the top ranked athletes, and historical decathlon performances. However, ultimately it is a human choice and if a different choice was made then different points would be received for the same athletic performances and the medallists in the Olympic Games might be different. The 2001 IAAF scoring tables have the following simple mathematical structure:

The points awarded (decimals are rounded to the nearest whole number to avoid fractional points) in each track event - where you want to give higher points for shorter times (T) are given by the formula
$$\mbox{Track event points} = \rm{A} \times (\rm{B} - \rm{T})^\rm{C},$$
where T is the time recorded by the athlete in a track event and A, B and C are numbers chosen for each event so as to calibrate the points awarded in an equitable way. The quantity B gives the cut-off time at and above which you will score zero points and T is always less than B in practice -- unless someone falls over and crawls to the finish! For the jumps and throws - where you want to give more points for greater distances (D) - the points formula for each event is
$$\mbox{Field event points} = \rm{A} \times (\rm{D} - \rm{B})^\rm{C}$$

The three numbers A, B and C are chosen differently for each of the ten events and are shown in this table. You score zero points for a distance equal to or less than B. The distances here are all in metres and the times in seconds.

Most importantly, the points achieved for each of the 10 events are then added together to give the total score. In our experimental ST scoring scheme above they were multiplied together. You could have added all the distance and all the times before dividing one total by the other though.

In order to get a feel for which events are 'easiest' to score in, take a look at this table which shows what you would have to do to score 900 points in each event for an Olympic-winning 9000-point total.

There is an interesting pattern in the decathlon formulae that change the distances and times achieved into points. The power index C is approximately 1.8 for the running events (1.9 for the hurdles), close to 1.4 for the jumps and pole vault and close to 1.1 for the throws. The fact that C > 1 indicates that the points scoring system is a 'progressive' one, curving upwards in a concave way; that is, it gets harder to score points as your performance gets better. This is realistic. We know that as you get more expert at your event it gets harder to make the same improvement but beginners can easily make large gains. The opposite type of ('regressive') points system would have C < 1, curving increasingly less, while a 'neutral'; one would have C = 1 and be a straight line. We can see that the IAAF tables are very progressive for the running events, fairly progressive for the jumps and vault, but almost neutral for the throws.

In order to get a feel for how the total points scored is divided across events, the Figure below shows the division between the ten events for the averages of the all-time top 100 best ever men's decathlon performances. 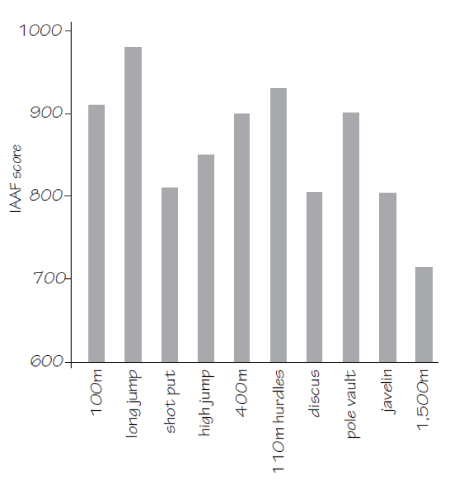 It is clear that there has been a significant bias towards gathering points in the long jump, hurdles and sprints (100m and 400m). Performances in these events are all highly correlated with flat-out sprinting speed. Conversely, the 1500m and three throwing events are well behind the other disciplines in points scoring. If you want to coach a successful decathlete, start with a big strong sprint hurdler and build up strength and technical ability for the throws later. No decathletes bother much with 1500m preparation and rely on general distance running training. 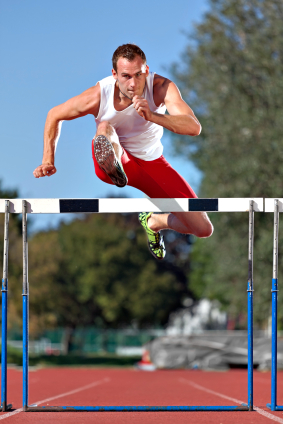 Clearly, changes to the points scoring formula would change the event. The existing formulae are based largely upon (recent) historical performance data of decathletes rather than of top performances by the specialists in each event. Of course, this tends to reinforce any biases inherent in the current scoring tables because the top decathletes are where they are because of the current edition of the scoring tables - it is not unfavourable to them. As an exercise, we could consider a simple change that is motivated by physics. In each event (with the possible exception of the 1500m), whether sprinting, throwing or jumping, it is the kinetic energy generated by the athlete that counts. This depends on the square of his or her speed (= $\frac{1}{2}\rm{MV}^2$, where M is their mass and V their speed), The height cleared by the high jumper or pole vaulter, or the horizontal distance reached by the long jumper are all proportional to the square of their launch speed ($\propto \rm{V}^2/g$, where $g$ = 9.8m/s is the acceleration due to gravity). Since the time achieved running at constant speed will be proportional to (distance/time)$^2$ this implies that we pick C = 2 for all events. If we do that and pick the best A and B values to fit the accumulated performance data as well as possible then the sports scientist Wim Westera has calculated that we get an interesting change in the top ten decathletes. Šebrle becomes number 2 with a new score of 9318 whilst the present number 2, Dvořák, overtakes him to take first place with a new world record score of 9468 (just like he did with my ST scoring system - although notice that I multiplied the performances together, all these other schemes add the points achieved in each event together). Other top rankings change accordingly. The pattern of change is interesting. Picking C = 2 across all events is extremely progressive and greatly favours competitors with outstanding performances as opposed to those with consistent similar ones. However, it dramatically favours good throwers over the sprint hurdlers because of the big change in the value of C = 1.1 being applied to the throws at present. And this illustrates the basic difficulty with points systems of any sort - there is always a subjective element that could have been chosen differently.

Stop Press!  A new world record was set for this event in the US Olympic trials during the weekend 23rd June 2012 by Ashton Eaton. The performances for each event and the points accrued by them can be found at http://www.usatf.org/events/2012/OlympicTrials-TF/Results/Summary-39.htm
It is an interesting little project to compare the pattern of points obtained across each of the events with the ideal 'average' decathalete in the graph in the article. Eaton is actually very different, doing far better in the running events and worse in the throws.

John Barrow is the Director of the Millennium Maths project, of which NRICH is a part. He is Professor in the Department of Applied Mathematics and Theoretical Physics at the University of Cambridge, and lectures widely on the public understanding of maths and science. His most recent book '100 Essential Things You Didn't Know You Didn't Know About Sport' was published by Bodley Head in March 2012.
The NRICH Project aims to enrich the mathematical experiences of all learners. To support this aim, members of the NRICH team work in a wide range of capacities, including providing professional development for teachers wishing to embed rich mathematical tasks into everyday classroom practice.