Walking Round a Triangle

The questions asked were:

How much was turned?

Is it always the same and (the big question) - why?

There was a lot of confusion about the angles involved and most solutions that were sent in indicated $180$ degrees. This number of degrees is of course involved in what we know of triangles. However, when going around a triangle we do not turn the internal angle but $180$ minus the internal angle.

The solution sent in by a pupil from TNT school in Canada does quite well in showing this. 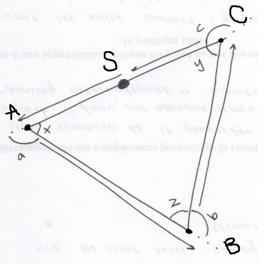 This would be the same for any triangle because this is a triangle with unspecified angles.

The other solution that tried to answer all the three questions was from Alexis who goes to Claremont Fan Court School, who goes on to say;

The Ladybird turns $360$ degrees in total. This is because in order to get back to the direction you were facing, you have to turn around $360$ degrees however many facings you go around. Ergo, this is true for any triangle, or any regular polygon for that matter.

Well done the two of you.