Two Numbers Under the Microscope

Two Numbers Under the Microscope

Choose any two odd numbers, such as 5 and 9. Add them together.

Draw a picture or make a model to show how the numbers add together.

Adam found some dominoes with 5 and 9 spots on them: 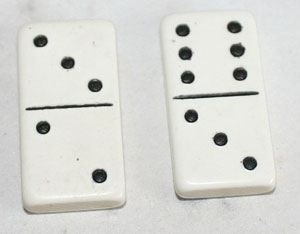 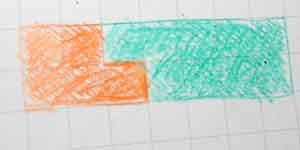 What do you notice about the answer?

Look closely at the models and pictures.

Can you see anything in any of them that would work in exactly the same way if you used two different odd numbers?

Can you use your one example to prove what will happen every time you add any two odd numbers?

See if you can explain this to someone else. Are they convinced by your argument?

Once you can convince someone else, see if you can find a way to show your argument. You might draw something or take a photo of things you have used to prove that your result is always true from your example.

This problem supports the development of the idea of generic proof with the children. This is a tricky concept to grasp but it draws attention to mathematical structures that are not often addressed at primary school level. It is possible that only very few children in the class may grasp the idea but this is still a worthwhile activity which provides opportunities for children to explore odd and even numbers and the relationship between them. Proof is a fundamental idea in mathematics and in encouraging them to do this problem you will be helping them to behave like mathematicians.

By addressing the case of adding two odd numbers, a generic proof that adding two odd numbers always gives an even answer is developed based on the structure of odd and even numbers. The article entitled Take One Example will help you understand how this problem supports the development of the idea of generic proof with the children. Reading it will help you to see what is involved.

This problem featured in an NRICH Primary webinar in January 2022.

Ask the children to choose two odd numbers and add them together. It is probably easiest if they choose ones that are easy to model and numbers that they are secure with.

Suggest that they make a model of their numbers using apparatus that is widely available in the classroom. Resist pointing them in specific directions unless they become stuck, but if they are then resources such as Multilink cubes, Numicon or squared paper will be helpful. After some time exploring they may need some prompting to move them towards looking at the pairing of their dots or cubes. These pictures may help.

Invite the class to share any noticings they have about the sum of their two numbers. Encourage learners to respond to each other's suggestions, and having given everyone chance to comment, specifically focus on the fact that two odd numbers added together make an even number.

Give everyone time to look at the way they have made their particular numbers, and ask whether they can see anything about their model that might help us to understand why this is always the case. You may like to give the class chance to walk around the room looking at all the different representations.

In the plenary, you can share the models that help draw out the general structure. Encourage learners to articulate what it is about the structure of odd and even numbers that means their observations will always be true. Using mathematical language to form a convincing argument is an important skill and, alongside the representations, constitutes a proof in the context of Primary mathematics. (You may like to read our article Why Dialogue Matters in Primary Proof to find out more.)

What do you notice about the answer?

Can you see anything in your example that would work in exactly the same way if you used two different odd numbers?

Can you say what will happen every time you add any two odd numbers?

Can you convince your friend that this is true?

Adding an odd and an even

You may find it helpful to work in a similar way to the way you worked before.

You could go on to look at Take Three Numbers.

It may be helpful to encourage children to use paper cut outs of the numbers such as these. In these the 'oddness' of the odd numbers is very clear.  Laminated sets of these cards could be a very useful addition to your classroom resources. Numicon would be an alternative resource to use.