This problem is linked to the project Observing the Sun and the Moon, from our STEMclubs projects. Observing the Sun is interesting but potentially dangerous - no one should ever observe the Sun directly with the naked eye. One way round this is to use a pinhole camera. 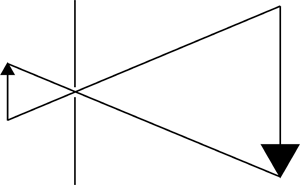 In situations where we might use a camera, light rays travel in straight lines which means we can use geometrical principles to investigate what is happening in the pinhole camera.
The diagram on the right illustrates how the pinhole camera works. The upright arrow represents an object.  Light rays travel from the object through the pinhole and onto a surface on which the image of the arrow can be seen.
Using similar triangles, we can work out how big the image will be and we can also see why it will be upside down compared to the original object.

Students should be encouraged to make their own pinhole cameras, and to find out how the image appears in relation to the object by experiment.  Once they have grasped that (a) the image is upside down, and (b) that its size varies depending on where the pinhole and the image surface are placed relative to the object, then data can be collected.

Suggest students start by varying the position of the screen only, keeping everything else constant, and see what effect this has on the height of the image.