Generic Examples: Seeing Through the Particular to the General

The focus of this month’s issue of NRICH is a topic that many readers will recognise, but may not have had a name for. Essentially, it’s about ‘seeing’ why something is true in general, but through the medium of a particular example of it.

But how can we possibly see more than the particular instance? Well, the paradox is explained by the human propensity to see individual cases as cases of categories that contain them.

Let’s say that I’ve found a really smart way of finding the square of 'something-and-a-half'.

Well, draw a square with side $7\frac{1}{2}$ and find its area. One way to do it is to cut up the square and reassemble it like this: 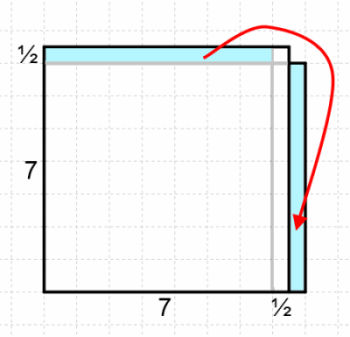 [Alternatively, if you know the difference of two squares identity:

In effect, you now know that $n$-and-a-half squared is equal to $n$ times $n$+1, and a quarter, for any positive integer* $n$: and why it is so. But I didn’t write out a general, formal proof of this generalisation – I only gave one example, with $n=7$ (although I did present it very carefully …).

* Actually this generalisation is not only true for integers, but my demonstration with $7\frac{1}{2}$ was easier to write because $7$ and $8$ are integers.

First, that a single example can provoke a generalisation in a person who ‘sees’ it in the intended way. Of course, two or more examples might be more effective in some situations. But in mathematics we never know general truths – in the sense of being completely sure that there are no exceptions – on the basis of examples, no matter how many we try. Instead, we look for some explanatory insight, usually a mathematical proof.

The second idea is that this kind of insight, or illumination, can sometimes be achieved by ‘talking through’ a single example, drawing attention to the structure of that example, in the way that I did with the square of 'something-and-a-half'. If this demonstration succeeds, the audience – colleague, students, whoever – see why the same, or analogous, reasoning would work just as well in other cases. For example, why $5\frac{1}{2}\times 5\frac{1}{2}$ must be equal to $\frac{1}{4}$ added to $5 \times 6$. This kind of ‘seeing’ is seeing through the particular example, as if it were a window onto a world of things analogous to it.

I have written about this phenomenon, as a pedagogical device, in a number of articles. Two of them are available here:
"i"is for Induction
Generic Proofs: Setting a Good Example

In this month’s issue, the problem Three Neighbours provokes a generalisation about the sum of three consecutive integers, and then invites the reader to reflect on just one of them with a view to seeing why it works in this case. At that point, the role of this single example is changed, from confirming the generalisation to explaining it. This generic mode of explanation, using well-chosen, carefully-structured examples, makes mathematical proof accessible in the primary years, to pupils to whom the usual kinds of algebraic-symbolic proofs would not be accessible.

The problem Slick Summing is one of my favourite generic examples, and surely gives us insight into the workings of the mind of the precocious young Gauss, while still at primary school.

Polynomial Interpolation was new to me! The single example demonstrates both how to find a polynomial through a given set of points, and why it works.
I shall finish with – appropriately - two more examples.

How many ways are there of ascending a flight of stairs if you can take one or two stairs at a time?

For three stairs, for example, there are 3 ways:

Students usually readily recognise what they call “the pattern”, and some know that this is called the Fibonacci sequence. So how could we explain why each term is the sum of the previous pair?

The interesting thing is that this particular example then becomes a window through which students can see what would happen in other cases (say from 8, 9 stairs to 10 stairs), and indeed beyond particular cases to the general.

In the paper: a party trick and a parting challenge

For some years now, the local daily newspaper, the Cambridge News, has published a whole-page spread of puzzles in each issue. Along with the predictable crossword and Sudoku, this page has a number of regular features such as a vocabulary test, a general knowledge section – and a Brain Twister. Beneath the light wrappings of an ‘everyday’ scenario of some kind, this last feature is overtly mathematical, and nearly always numerical. The problem setter frequently shows considerable ingenuity and originality, and has certainly brought some properties of, and relationships between, particular numbers to my attention for the first time.

The difficulty of the problems posed varies enormously, from highly-challenging to relatively straightforward. A recent one concerned a clue about the age of a maths teacher about to retire: her age was equal to 3 times its first digit added to 7 times the second digit. Once I’d solved it, I wondered which other two digit numbers can be expressed like this, i.e. as a multiple of the first digit added to a multiple of the second. And I’d like the multiples to be less than 10-times the digit in each case. As a result, I now have a new party trick: here it is.

Pick any positive whole number between 10 and 90. Avoid multiples of 10, please.
Write it down.
Next, write the number:
(a) whose first digit makes 10 when added to the second digit of your chosen number
(b) whose second digit is just 1 more than the first digit of your chosen number.
Now find the product of the tens digits in these two numbers, and the product of the units digits, and add these two products. Amazing!

Now, how would you explain why this ‘works’? Probably some algebra comes to mind, and maybe you have already done it. But what if the person wanting help with the explanation is not familiar with algebraic notation (letters) and syntax (such as ‘multiplying out brackets’)?

Your challenge is to construct a narrative explanation, by means of a generic example. It may require some thought! I like to start from 83, but there are lots of options. Is 37 a good choice? Or 45?

Tim Rowland works at the University of Cambridge Faculty of Education.