Watch this video to see the game being played.
Can you work out the rules? 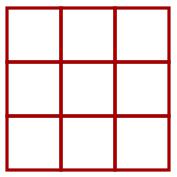 Take turns to throw the dice and draw that number of dots in one of the boxes on the grid.

Put all of your dots in one of the boxes. You can't split them up and you can't have more than six dots in a box.

When a box is full, you could put a tick in the corner like this: 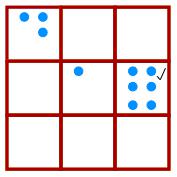 Keep going until there are three ticks in a row or column or diagonal. The winner is the person who puts the last tick.

Now, can you change the game to make your own version?

The game as introduced is intended for KS1 children who are just beginning to become confident with small numbers. However there are many variations, some suggested below, that make it suitable for older children. As with many of the NRICH games, consolidation of basic number facts is combined with an element of strategic thinking.

With very small children you may wish to play the game with a small group first before encouraging them to play in pairs.

If you have access to a projector and screen, you may wish to use the PowerPoint presentation with older children and click through in your own time. (This version of the PowerPoint file uses blue dots on the grid so that it is not possible to distinguish between each player's dots.) If that is not possible, choose a child or another adult to play the game with you somewhere where everyone can see what's going on. The children watch in silence, having been prompted to watch closely to see if they can work out what the rules of the game are. You may need to show the animation more than once. You can find some Dotty Six grids here as a Word or a pdf file for recording the results of the game.

Take suggestions about what the rules may be, perhaps recording them centrally once everyone has agreed. They are:

When everyone has played a few times, you can change the game:

You may also like to read the article Developing the Classroom Culture: Using the Dotty Six Activity as a Springboard for Investigation which suggests focusing on the game in a staff meetingto support the development of classroom culture across the school.

Where will you put your dots? Why?

How do you know where to put your dots?

How many more do you need to win?

Small children can use multilink or counters, or Numicon, on a large grid (available as a Word document or pdf), rather than recording with dots on a small one. They could begin with six counters in each box and take away the number thrown on the dice.

This is a great game for children to use their creativity and to work at a level at which they feel comfortable. The sophistication of their recording will change with their confidence.

Provide a range of dice including blank ones. They could:

Encourage them to write the rules out for someone else to follow. Perhaps they could submit them to NRICH!
Helen Williams and Pip Huyton, members of the Joint ATM/MA Primary Group, suggest the following adaptions to Dotty Six, many of which may be precursors to the game:
Thank you to Helen (@helenjwc) and Pip (@AccomplishEdu) for taking the time to share their suggestions with us, and thank you to Kat Galvin for helping to create the video of the game being played.
You can follow Dotty Six on YouTube here.
The NRICH Project aims to enrich the mathematical experiences of all learners. To support this aim, members of the NRICH team work in a wide range of capacities, including providing professional development for teachers wishing to embed rich mathematical tasks into everyday classroom practice.