My two digit number is special because adding the sum of its digits to the product of its digits gives me my original number. What could my number be?

Think of a number and follow the machine's instructions... I know what your number is! Can you explain how I know?

Learn to write procedures and build them into Logo programs. Learn to use variables. 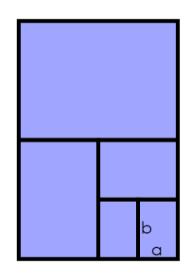 Charlie took a sheet of paper and cut it in half.

Then he cut one of those pieces in half, and repeated until he had five pieces altogether.

He labelled the sides of the smallest rectangle, $a$ for the shorter side and $b$ for the longer side.

Here is a shape that Charlie made by combining the largest and smallest rectangles: 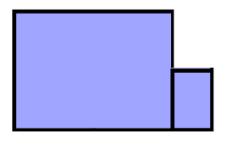 Alison combined the largest and smallest rectangles in a different way. Her shape had perimeter $8a + 6b$. Can you find how she might have done it?

Charlie and Alison made sure their rectangles always met along an edge, with corners touching.
Can you combine the largest and smallest rectangles in this way to create other perimeters?

Create some other shapes by combining two or more rectangles, making sure they meet edge to edge and corner to corner. What can you say about the areas and perimeters of the shapes you can make?

Here are some questions to consider:

What's the largest perimeter you can make using all the pieces?

Can you make two different shapes which have the same area and perimeter as each other?

Can you make two different shapes which have the same perimeter but different areas?

How do you combine any set of rectangles to create the largest possible perimeter?

Charlie thinks he has found a shape with the perimeter $7a + 4b$. Can you find his shape?

What can you say about the perimeters it is possible to make, if $a$ and $b$ are the dimensions of one of the other rectangles?

This problem is based on an idea shared by Sue Southward.
The NRICH Project aims to enrich the mathematical experiences of all learners. To support this aim, members of the NRICH team work in a wide range of capacities, including providing professional development for teachers wishing to embed rich mathematical tasks into everyday classroom practice.