Take a look at some ordinary dice.
What do you notice about the way the numbers are arranged?

Now look at these three dice in a row: 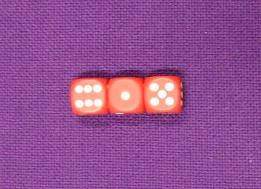 What do the numbers on the top add up to?
Can you use what you found out about the way the numbers are arranged to say what numbers are on the bottom of the dice? Were you correct?

What is the sum of the numbers on the bottoms of the dice? 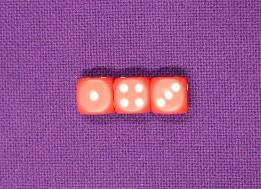 Do you notice a relationship between the 'top sum' and the 'bottom sum'?
Can you explain it?

I try to arrange the dice so that the top and bottom sums are both multiples of four, but can't seem to be able to do it. Can you? Can you explain what you find out?

This problem encourages children to explain observations and to generalise.  It requires a good understanding of multiplication.  It may also introduce the idea that opposite faces of a dice add to seven, if that is something with which learners are not already familiar.

Before you introduce the problem give the children an opportunity to look at and then compare several dice in order to find the connection between opposite faces.

You could then introduce the problem with three large dice.  Ask children to calculate the sum of the top numbers and the sum of the bottom numbers, and record the results on the board.  You could try this a few times altogether, recording the sums each time. Ask the group to try more examples in pairs, then add these findings to the board.  Make sure  they check their calculations!  Gather the group together again and invite learners to comment on anything they notice. Challenge them to explain why the sum of the top and bottom faces added together is always $21$.  If they have not realised that opposite faces add to $7$, then you may have to  ask a few probing questions about a single dice.
Move on to introduce the second part of the problem, perhaps by arranging the dice in a particular way, for example with $1$, $2$ and $3$ on the top faces.  You could remark on the fact that both the top and bottom sums are multiples of $3$ and set the children off on investigating whether, if the top sum is a multiple of $3$, then the bottom sum is always a multiple of $3$ too.
After a suitable length of time, bring everyone together again to discuss their findings. This gives you a chance to talk about proof in mathematics.  The first stage for children is looking for counter examples to a theory.  Ask the group whether anyone has found an example when the top sum was a multiple of $3$ but the bottom sum wasn't.  Is that enough for us to say that it will ALWAYS be the case?  What if we just haven't found that one way of arranging the dice that gives us a multiple of $3$ on the top and a multiple of something else (not $3$) on the bottom?  The justification (or proof) might be difficult for some to articulate but remind learners what we know about the total sum of the top and bottom numbers (it is $21$).  What can they say about $21$?
You may like to pose the final part of the problem for learners to think about over a longer period of time and perhaps devote some space on your wall for them to contribute findings.

What do you notice about the totals of the top and bottom faces?
How can you explain your observation?
What do you know about opposite faces of a dice?
How do you know that will ALWAYS be the case?

Encourage children to ask their own questions to investigate.  They could write up their conjectures and discoveries on your maths wall.

At least three dice per pair should be available along with miniwhiteboards or paper/books for recording. A multiplication square might be useful for the second part of the activity so that pairs can check multiples of $3$.
The NRICH Project aims to enrich the mathematical experiences of all learners. To support this aim, members of the NRICH team work in a wide range of capacities, including providing professional development for teachers wishing to embed rich mathematical tasks into everyday classroom practice.