Seven mathematicians met up one week.

How many handshakes were there altogether? 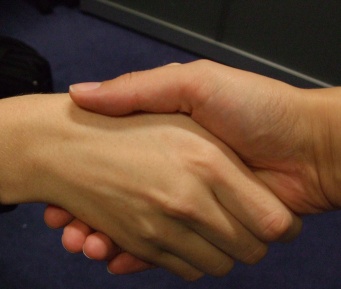 The next week, eight mathematicians met. How many handshakes took place this time?
The following week, there were nine mathematicians...


Sam is trying to work out how many handshakes there would be if 20 mathematicians met. He says that since each mathematician shakes hands 19 times, there must be $20 \times 19$ handshakes altogether. Helen disagrees; she worked out $19 + 18 + 17 + ... + 2 + 1$ and got a different answer. What is wrong with Sam's reasoning? How should he modify his method?


One day, 161 mathematicians met. How many handshakes took place this time?


Can you describe a quick way of working out the number of handshakes for any size of mathematical gathering?


Could there be exactly 4851 handshakes at a gathering where everyone shakes hands? How many mathematicians would there be?


What about the following numbers of handshakes?

You may wish to try the problems Picturing Triangle Numbers and Mystic Rose. Can you see why we chose to publish these three problems together?

You may also be interested in reading the article Clever Carl, the story of a young mathematician who came up with an efficient method for adding lots of consecutive numbers.
The NRICH Project aims to enrich the mathematical experiences of all learners. To support this aim, members of the NRICH team work in a wide range of capacities, including providing professional development for teachers wishing to embed rich mathematical tasks into everyday classroom practice.