Navjot from Sherborne Qatar and Siddhant from Singapore International School in India described the pattern in slightly different ways.


Navjot said: The first image shows a pink square, in which there is a blue square rotated by 45 degrees, within which there is another pink square, rotated back to its original position, and this pattern is repeated for a few more squares. The pattern would continue in a similar fashion forever (although some may think that it will stop once we run out of space, however this is not going to happen because there is always going to be a smaller and smaller area available for another square).


To find the proportion of the total area of the square that is taken up by the small square in the middle, Deana from from KIS International School in Thailand used a beautifully simple method:
1:64
If the smallest pink square area is 1, then the smallest 4 triangles are 1
too. Because the 4 smallest triangles=1 smallest pink square.
And so you need to double the area to 2, then you continue double it for 7
times.
First
1
2
4
8
16
32
64
And you are done!!!


Siddhant and Navjot both found this area using Pythagoras' Theorem. 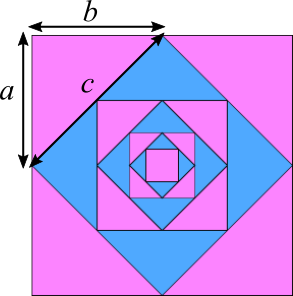 
Yoram from Avenue Primary School in the UK and from Allenmoos School in Switzerland had a very simple explanation for what proportion of the square would be blue if the pattern continued forever:
The blue part is one third. Because the largest four blue triangles make two of the biggest pink triangles. And it is the same all again with the smaller triangles.
And so, pink is twice as much as blue.

However, the negative powers of $2$ are either being added OR subtracted. To represent this each time, we can use $\left(-1\right)^n.$

Let's see if this works:

Therefore, this formula works and shows the correct proportion of blue at each stage of the formation of the image.

Now, we can finally add all these areas up to infinity and that will give us the area of the blue squares, and the fraction of the large square that is blue.

Formula of a geometric sequence going up to infinity is $ a\left(\frac1{1-r}\right),$ where $a$ is the first term of the series and $r$ is the common ratio.


For each of the images below, it is possible to find the fraction that is blue using a simple argument like Yoram's or Ni. It is also possible to find the area of each blue shape using a doubling method like Deana's, or by drawing smaller squares inside the square. Below is Navjot's solution, which continues to use Pythagoras' Theorem and formulae for geometric sequences. 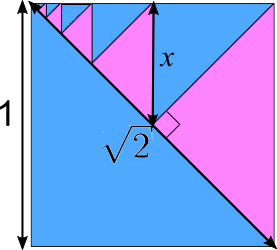 In this diagram, the largest diagonal goes through the midpoint of the whole square. The other diagonals are perpendicular to this one. The diagonal on the farthest right intersects with the first diagonal at its midpoint.

Let’s assume that the side length of the major square is $1,$ therefore the area of the first blue triangle is $\frac12\times1^2=\frac12.$

Since the side length is $1,$ the first diagonal’s length is $\sqrt{1+1}=\sqrt2,$ the perpendicular bisector (the diagonal on the farthest right) cuts this diagonal into 2 equal halves, each of length $\frac{\sqrt2} 2.$ Since the bisector and the diagonal meet at the midpoint of the square, we know that the bisector is of the same length. This information will help us in finding the side length of the second largest triangle. We can use the Pythagorean theorem to find this length. This is made easier by the fact that the triangle is right angled AND isosceles.

Carrying this procedure on forever would mean that we use the same series but instead of $4$ being the last $n$ value, we go up to infinity.

Therefore, if the pattern was infinitely repeated, the $\frac23$ of the area of the square would be blue.

Navjot had a very good idea for a solution to the next shape, but unfortunately it contains a mistake: 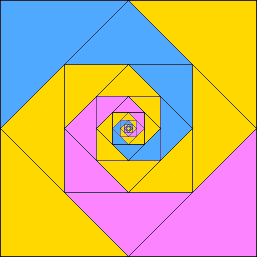 For the second diagram, the area covered by blue in this shape must be a quarter of the area of the square in the first part of the question since the structure is very similar, it’s just the fact that only 1 of the 4 triangles formed by the outer square and the inner, tilted one were blue.
In fact, this isn't true because only half of the "layers" of squares in the first shape contain blue triangles (and the other half are pink), but every single layer of the second shape contains a blue triangle.


Navjot continued with the next diagram. Again, it would be possible to use a method like Yoram's to calculate the blue area directly, or to split the square into smaller squares to find the area of each blue triangle. Navjot kept using Pythagoras' Theorem: 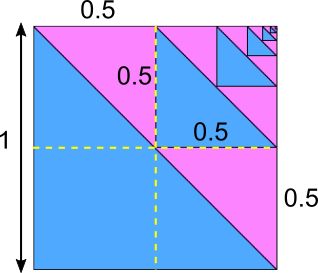 For the third diagram, the idea I will be implementing will be pretty similar to that of the first diagram of this section. Let’s again assume that the side of the large square is $1$ unit, therefore the first diagonal that splits the square into a blue triangle and the rest of the shape is
$\sqrt2$ units long. The lines that perpendicularly bisect two of the sides of the square intersect at the mid point of the diagonal.

Since they meet at the midpoint and come are perpendicular to the sides of the square, two right angled isosceles triangles are formed with hypotenuse lengths being $\frac{\sqrt2}2$ units long. Using the Pythagorean theorem:
$\sqrt{2x^2} = \frac{\sqrt2}2$
Therefore, $x = 0.5$

Now, like the first square of this part of the question, let’s forget about the initial square and zoom into the shape so that we get the original square again, just with side lengths $0.5$ units. By doing this, we are back to the initial part of this question and can repeat what we have
done before.

Therefore, $\frac23$ of the square is shaded blue.