What's All the Talking About?

Here's a picture of thoughts and ideas relating to teacher-pupil talk and pupil-pupil talk in the classroom. Practical ideas for improving the mathematics in a school, by considering the interactions between teachers and pupils, are considered along with some thoughts about how teacher-pupil talk can affect the pupils themselves.

Want to see it more easily and print it out? Go here. 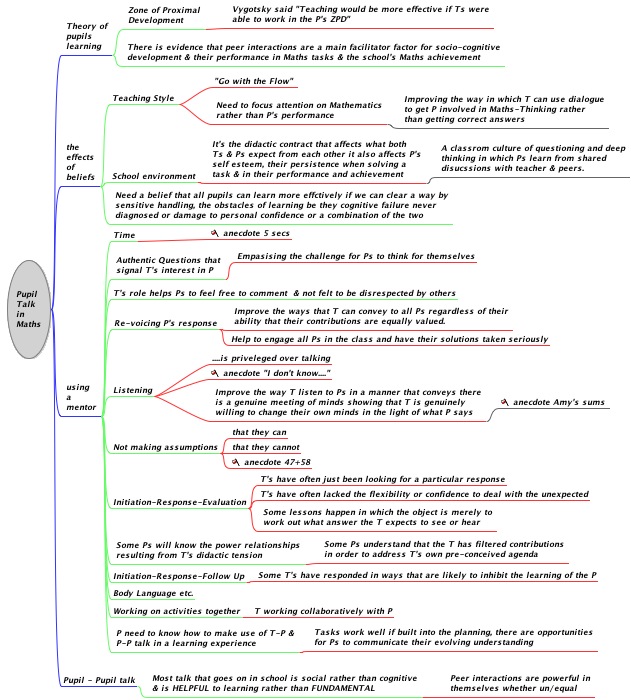 Lots of the time that a teacher spends with children is spent trying to engage with them, to ensure the best possibility for their mathematical development. in this article I encourage you to get involved in the conversational side of mathematics and in different forms of communication and presentation.

Let's look at what may be involved in trying to improve the quality of pupil-teacher and pupil-pupil talk in mathematics.
I ran a course on "Pupil - Teacher Talk in the Maths Lesson" which, some time later, was followed up as I worked alongside the teachers in their classrooms. On one occasion a teacher went up to a boy called Michael; here's the conversation:

So it went on, with Michael not saying a word. The teacher then came over to me and said "I've had a most interesting conversation with Michael." Then there was a slight pause as if she were going to tell me more but I jumped in and asked, "Did he actually say anything?"
A slight pause followed by an embarrassed teacher and then: "Oh !. . . . . No!"

At least she was trying to talk with the individual pupil and said that she wanted to know how he had done his work. But somehow what she said probably did not reflect what she really thought about her pupils' learning and her teaching. It's rather like the situation when a teacher initiates some talk by asking a question. The pupils give a response in the form of an answer and then the teacher replies with a follow up question. On other occasions the teacher will simply evaluate the pupil's answer - "Good", "Well done!", "Right", "OK", "No!", "Think again" or "Is that the best you can do!". The last example does not expect a reply.

There is some inequality in the power structure of this "talk". This is sometimes accompanied by a "game-type" situation in which the purpose of the lesson seems to be "try to guess what the teacher is thinking". I believe this sometimes happens because the teacher is at that time lacking the flexibility or confidence to deal with the unexpected. This may be because of the teacher's belief about how pupils learn. Some of the more mature pupils will be aware that the teacher has filtered pupils' contributions in order to address the teacher's own pre-conceived agenda. Research suggests that this kind of inequality in the power structure during "pupil-teacher talk" inhibits the future learning of the pupil. And of course other factors are involved in communication too, such as the teacher's body language, and the environment they create.

So, how can the situation be improved so that better learning takes place? I have come to see that one of the biggest influences on teacher behaviour is the teacher's beliefs regarding learning.

1. A lot of the beliefs that come from extensive studies say, "There is evidence that peer interactions are a main facilitating factor for socio-cognitive development and their performance in maths tasks and the school's maths achievement". A teacher with such a belief is more likely to try to improve the teacher-pupil talk and so enable pupil-pupil talk to improve. However most talk that goes on in school is social rather than cognitive and may, at the most, be "helpful to learning" but needs to be refocused as "fundamental to the learning."


2. More beliefs may stem from research that hints that it is the didactic contract [whether overt or not] that affects what both teachers and pupils expect from each other, pupils' self esteem, their persistence in solving a task and their performance in maths.

I seem to have developed these kinds of beliefs, without the research. Many teachers will, as I have done, develop beliefs through reflecting on what they have experienced in the classroom and teacher meetings. Some teachers will be encouraged by the work of Vygotsky. When writing about the Zone of Proximal Development [ZPD] he says that it is his belief that teaching is more effective when children work in the ZPD, the difference between what a learner can do without help and what he or she can do with help. Teacher scaffolding is therefore very important - and can be done in many ways.

For example, if you're lucky enough to be observing a maths lesson, watch how the teacher responds to ideas that pupils put forward when they are working on a task. Consider a situation where a group of pupils are working on a spatial task. One child suggests, in a self-questioning way,
"Its something like a cube. . . . ."
The teacher can helpfully follow that in a number of ways. Re-voicing precisely what the pupil said to the group in a questioning voice.
Teacher "It's something like a cube (?). . ."
This encourages other pupils to comment on that idea, ie encourages pupil-pupil talk to emerge.

These peer interactions are a powerful source of learning, not only between children of similar ability. It's been found to be true when the pupils' knowledge is unequal, more able pupils working with others of lesser ability. It's important to convey to all pupils, regardless of their ability, that their contributions are equally valued so that they can engage in the conversations and have their suggestions taken seriously.

When the teacher is sensitive to these kinds of interactions this can create a classroom culture of questioning and deeper thinking, in which pupils learn from shared discussion with the teacher and peers. Teachers focus their attention on the mathematics rather than the pupils' performance. They use dialogue to get pupils involved in mathematical  thinking rather than getting the correct answers.

Teachers see improvements when their own listening improves and they really listen to what a pupil is saying. I was with a group of able pupils, aged 11, on a residential course and the pupils were sharing experiences that they felt arose particularly because they were more able. One young boy related how earlier that week he had some work that he could not do. He went to the teacher, sitting at her desk at the front and said "I don't know how to do this." Then she quickly replied saying,"Yes you do, because you are clever!"
I then asked him,"How did you feel at the point?"and he replied "I felt I was like a wall of glass. She didn't really see me at all!'"

I would imagine that the teacher thought she had done the right thing in confirming that he was clever. But she had unfortunately also shown that she did not listen and that seemed to hurt him more. When listening well to our pupils it's important to convey a genuine interest; on some occasions it may be necessary to change our minds in the light of what the pupil says or records. I was working with an 8 year old who was doing a problem that involved a number of additions and subtraction. Here are three versions: what I saw on her paper, what I was expecting and an in-between alternative. 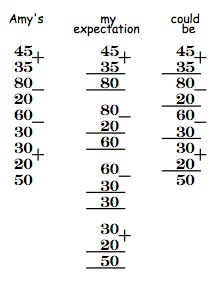 I was about to prompt her to write it the way I was expecting when I cautioned myself . As you can imagine I was thinking that she would get confused when looking back but I was beginning to understand about respecting pupils thinking and ideas. Needless to say she never got confused with her methods of recording whilst doing a long task! She knew exactly what she had done.


This leads us to consider how we can encourage better dialogue by not making assumptions. I was visiting a teacher in her classroom and was invited to observe the pupils working. I arrived at a 9 year old boy's table who had just written this,

When subsequently sharing this experience with teachers they were quick to identify the mistakes that the boy had and which indicated his lack of understanding. But at the time I spoke to the boy, the following took place,


Me: "Tell me about this"
Boy: "Its easy 7 and 8 make 15, put down the 5 and carry 1. Five 4 five and 1 make 15.
Me: "What does this say?" pointing to the 58 and wanting to discover how he is thinking about these numbers.
Boy: "It's a 5 and an 8"
Me: "Tell me about these" pointing to the T and U.
Boy: "That's Tens and Units," said in an annoyed voice, he seemed to want to copy down the next similar sum from the work card.
I wrote 58 some where on a piece of scrap paper, as I wanted to see what he would call it. He said that it was another 5 and an 8. I tried to think of another situation in which he may have seen tens and units. I thought of bus numbers. Me: "Suppose a bus went by and on. . . . " he interrupted me
Boy: "It'll be a fifty-eight"
Me: "Could we call this fifty-eight?" pointing back to the sum.
Boy: "Yes, if you like" said nonchalantly.
Me: "And this?" pointing to the 47.
Boy: "It'd be forty-seven. Do you want me to add it?"
Me: "Well yes"
Boy: "40 and 50 is 90. 7 and 8 is 15. The answer is 105" said as quickly as most people could say it.
So you can imagine the response of the teachers when they heard this, previously thinking he lacked much understanding of tens and units, and then realising he could do the calculation so quickly in his head! From that moment on I vowed to not make assumptions about what pupils can or cannot do.
We can also improve the way we have dialogue by getting into situations where we can work on tasks alongside pupils, even collaboratively with them. In these situations it is good for pupils to get accustomed to using Pupil-teacher and pupil-pupil talk in learning experiences. These tasks work well if, built into the planning, there are opportunities for pupils to communicate their evolving understanding.


Pupils' previous experiences sometimes prevent them from learning effectively. However the teacher can clear a way by sensitively removing the obstacles of learning, (be they cognitive failure never diagnosed or damage to personal confidence or a combination of the two), especially in the first few years of schooling by arranging to have quality time with each child at least once a month even if only for a few minutes. Better to do a little rather than just think there's not enough time ever to do it.


Finally to summarize to make improvements


1. Try to use tasks that engage the pupils in thinking for themselves and allow you to work alongside them on occasions.
2. Find time to listen and communicate with pupils as they work on these tasks.
3. Try to avoid controlling the communication to get to a mathematical end that you have predetermined but encourage mathematical thinking instead. "Go with the flow."
4. Wait at least 5 seconds for a response before speaking further.
5. Help pupils to speak and listen to each other in a constructive way.
6. Do not make assumptions.
7. Watch body language and voice intonation in order to minimise a power imbalance.

If you are interested in researching further then Google 'Teacher Interaction with pupils', 'Pupil-Teacher talk' or 'Teacher-Pupil dialogue'. You can also search at bsrlm.org.uk

If this is new to you then please give it some thought, and speak to others about it. Your pupils deserve it!