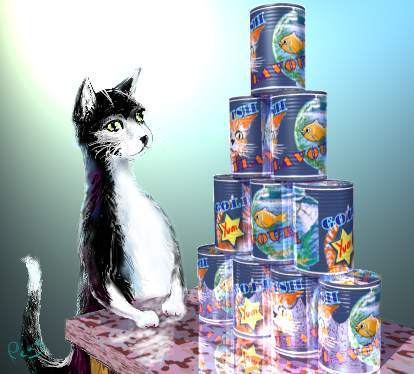 Sam sets up displays of 105 cans of cat food in his shop in triangular stacks. He puts 14 on the bottom row, 13 on the next one up, 12 on the next and so on... and finally one on top, a stack 14 layers high. How tall would this stack be? Would it be taller than you are?

Tom buys 7 cans from a triangular stack with nine rows. Sam re-stacks the remaining cans into two new triangular stacks with different numbers of rows. How many rows do the two new stacks have?

Sam finds he can arrange 49 cans into 3 triangular stacks in two different ways. What do you think Sam's solutions were? Are there only two possibilities? Can you find another number which can be split into 3 triangular numbers in more than one way?

Make up your own can stacking puzzle.

This activity acts as a good introduction to trianngular numbers and their patterns. It certainly is suitable for the younger pupils.

It would be best to introduce this in a totally practical way with the children observing a small triangular tower built out of cans or whatever is available. Then, you could show them a similar triangular tower that's taller and invite the pupils to talk about what they see. If their conversations don't naturally bring out the numbers of cans used, then you can ask appropriate questions.


You could then introduce the problem orally to the class and encourage them to work in pairs or small groups.

Tell me about the numbers you can see.
What do you notice going on in these triangular patterns?

Children could try Human Food as a follow-up activity.

Some pupils will need to go very slowly at first with the smallest of triangular arrangements and will probably benefit by having arrangements there in front of them for comparison and exploration. They could use any concrete objects to represent the cans.