Allowing pupils to record their mathematical ideas as they wish can open up some interesting thoughts in a teacher's mind.

I was doing an activity rather like I'm 8 but on this occasion we were making twenty. One of the adults in the room made some unencouraging comments about this piece of work that they saw a 7-year old had done: 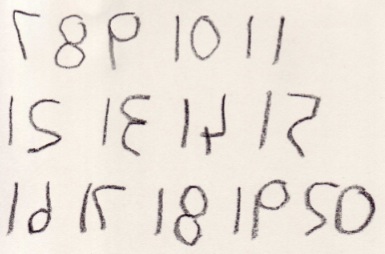 I was intrigued so I asked the young girl to tell me about what she had done. She spoke, as if disturbed that I should need to ask, and said, "Well, YOU said make twenty in any way we like. So here are ..." (she started to count the number of numbers that she had written down) "... fourteen numbers and ... there's the six that I did not write, that makes twenty." There was a pause and then she added, "I've written them this way so that when you put a mirror next to them you can see what the numbers are."

It's so easy and tempting to draw conclusions about what we see, viewing it as a piece of maths that an older and more experienced child might present, therefore judging it to be very poor. It could have been assessed as a piece of work illustrating that the pupil has no idea about writing numbers or of performing a calculation that would give $20$ as an answer.

So, I'm pleading for caution on making assumptions, when looking at a child's representation of the mathematics they have done. We need to consider the child's ability to communicate (and the opportunities we provide for communication), the child's understanding of his or her own mathematics and to bear in mind that this may not necessarily, at this stage, be totally in line with 'school maths'. Children's Mathematics; Making Marks, Making Meaning by Worthington and Carruthers (2006) can help us to broaden our understanding of these issues. (This can be purchased from Abebooks from here.)

I believe there are quite a few good reasons for pupils to record their work when using and applying mathematics, and these are not just about satisfying adults that the work has been carried out! These are (in no particular order):
When the pupils are presenting their ideas on paper then there is a need for respect rather than to be in a hurry to get 'it' to conform to 'school maths'.

I was visiting a classroom and went to a 9-year old boy and this is what I saw: 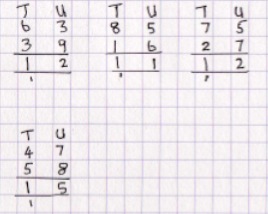 He was just about to start the next one, from the work card from which he was copying his work, when I asked him to tell me how he was doing the calculations. Very confidently he explained the last one saying, "Seven and eight are fifteen so I put down the five and carry the one", (showing me where the little one was). "Four, five, one and five make fifteen." (He pointed to the four and five under the tens, the one he carried and the five that was in his answer for the units.) Now I realised that, considering what he said in isolation, it was quite correct.

I have re-lived this with a number of teachers and they have suggested that the boy had all kinds of problems - lack of understanding of place value, a real need for some counters, not ready for these kinds of sums yet etc.

I had decided to find out more about his thinking so I pointed with my wide finger to the T U and asked him what they said. "Tens and Units," he said in a voice showing that he was anxious to get on.
"What about these?" pointing to the $58$.
"That's a five and an eight!"
So I decided this was what I wanted to pursue. I wondered if he could say something different if they were written elsewhere so I wrote on a nearby paper, $58$.
"That's another five and eight," he said rather impatiently - he was picking up his pencil to carry on.
So I tried to think of another situation where he might naturally come across the $58$.
I thought of buses (since we were in a big town) so I started asking, "Suppose a bus went by and it ...". He interrupted me by saying, "It'd be a fifty-eight."
"Could we pretend that this (pointing to his sum) is a fifty-eight as well?"
"Yes, if you like," he said in a very nonchalant voice.
"What would this be?" pointing to the forty-seven.
"It'll be forty-seven. Do you want me to add it?" he asked.
"Yes please."
Then, as quickly as it can be said, he replied, "Forty and fifty is ninety, seven and eight is fifteen. The answer's one hundred and five."
"Yes!" I said, "Well done!"
What a surprise when, what seemed like an inability to deal with these additions, turns out to be evidence of a teacher not establishing a relationship between his mental maths ability and the formal calculations that were expected.


---------------------------------------
Can we therefore help the children in our care to feel confident about their own maths and help them gradually to make the links to what is seen as 'school maths' written work? Their thoughts and ideas need to be valued and we should allow them to have ownership of their mathematical ideas and understanding.