Here is a game that uses two dice and cards with the numbers 1 to 12 on them. The aim of the game is to turn over all the cards. You can turn over the cards that match the numbers on the dice. 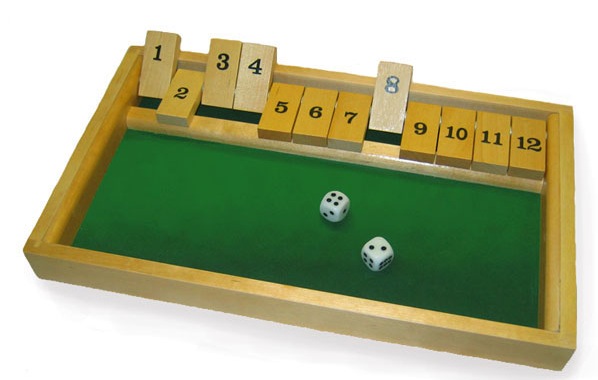 To play the game, start with the numbers showing on all the cards.

The first player rolls the two dice.
They can turn over the cards which are the same as the numbers rolled.
For example, if a 4 and 5 are rolled, they would turn over the 4 and 5 cards. If a double is thrown, the player's turn ends. They can roll the dice again until they can't turn over any more cards. The cards that are left showing are then added and that is their score.

The dice are then passed to the next player who turns the cards the right way up again and then rolls the dice in the same way as player one. They now can keep on rolling dice as long as each time they can turn over some new cards. Remember that if a double is thrown, the player's turn ends. When the player can't turn over any more cards, those that are left are added together and that is the player's score.

The winner is the person with the lower score.

Can you explain your strategy?
What is good about the game? What is not so good? Why?
How could you alter the rules to make it better?

It can be played with just one turn each or each player can have a number of turns that you decide at the beginning of the game.
Here .doc pdf are some cards which you could print out and cut up to play the game.