Where Can We Visit?

Charlie and Abi put a counter on 42. They wondered if they could visit all the other numbers on their 1-100 board, moving the counter using just these two operations: x2 and -5. What do you think?

Can you find the values at the vertices when you know the values on the edges?

Can you make a hypothesis to explain these ancient numbers?

We received many solutions and ideas about this problem from schools and colleges including Robert Gordon College, Hawthorns School, Heckmondwike Grammar School and Wilson's School in the UK, the Learning Enrichment Studio and the Frederick Irwin Anglican School in Australia, the Garden International School in Malaysia, PSBBMS in India and the British Vietnamese International School in Hanoi. We were especially impressed by the answers we received which carefully explained the thinking behind your strategies. Well done, everyone!

Several responses commented on the fact that the distribution we obtain from taking random samples may not correspond to the actual distribution of the marbles. For example, if a sample of 10 marbles did not contain a blue ball this did not necessarily mean that there was no blue in the bag.

Sydney and Maika from the Frederick Irwin Anglian School shared their strategies for overcoming this issue:

You have to draw at least 2 times to be confident enough.

We usually would draw 3 or 4 times.

One of the first things we checked was if only 3 colours showed we would have to check again.

Obviously, if it rarely appeared, that colour only has one or two marbles.

Briefly record the draws in your mind to see how frequently it shows up giving you a good idea of what to guess.

If there is many of the colour being pulled, then again, there must be about 3-5 of them in there.

Leia and Vihaga, also from Frederick Irwin, drew this table to help them to keep track of their results: 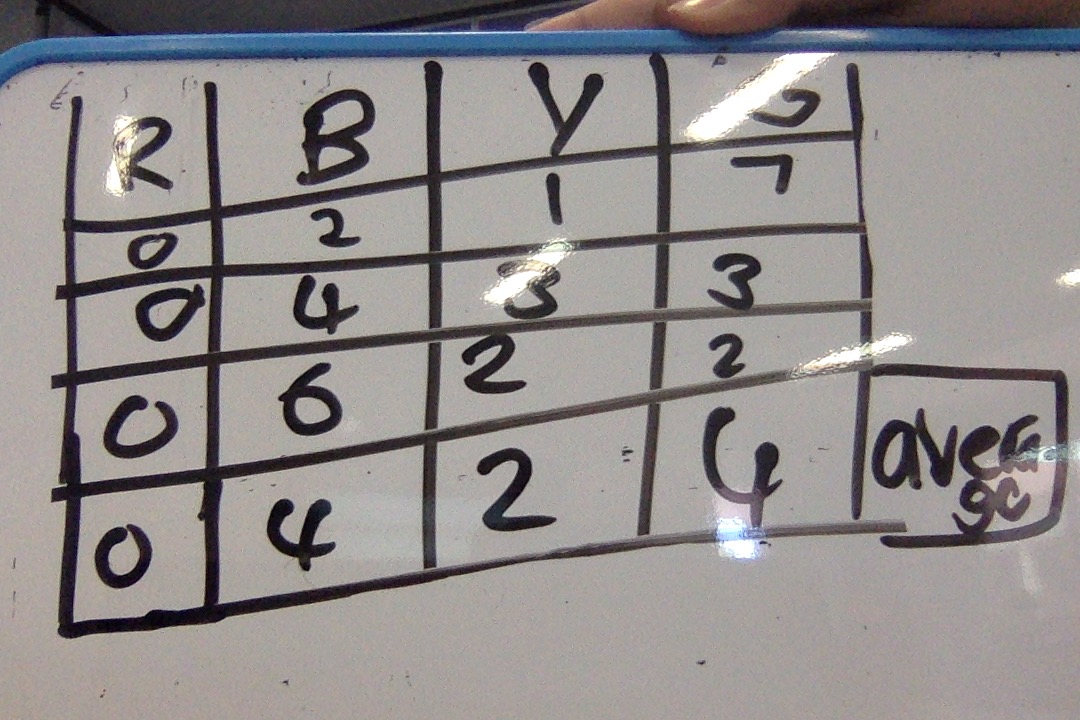 They discussed how their table supported their mathematically thinking:

In the above picture you can see a table. The top row represents the colours (R, B, Y, and G). I have recorded the amount of each coloured marble for every round. After three rounds, I then used the fourth row to average out the amounts of marbles for each colour. I then typed in my 'averaged amounts' as my answers. I kept doing this until I reached 1000.

Corey and Trent, also from Frederick Irwin, explained how their table helped them to reach a solution:

You first want to perform ten random viewings and record the results in table. For example:

After you have recorded these select another random ten viewings. You then want to find out how much your marbles under each colour has gone up by. For example:

You then want to minus the first result from the second result and record the numbers left over into the second layer of your table. For example:

Take another ten random viewings and repeat the last two steps unitl you have four final results. You then need to find the average of these results by adding them all together and dividing by 4 as that is the amount of results you are adding.

For this problem, you should start by putting a base of 2 marbles with each colour (due to 10/4 becoming 2.5 and 2 was the only number suitable for each colour). Once you have done this, choose two colours to make the total of 10 marbles and add an additional marble to that selection. By doing this, you will get at least 8 of the coloured marbles right. Once you have seen the misplaced marbles, you can alter the number of marbles for each colour and you would already achieved 1000 points within 2 rounds. This was a method that I found simple and effective.

There are 4 colours and 10 marbles therefore meaning there is a 25% chance of each. This means there is technically meant to be 2.5 of each but since that isn't possible, the most likely answer is 2 each of 2 of them and 3 each of 2 of them.

Here's another solution, from Miraya at Heckmondwike School, who explored ways to reach 1000 points:

The way I did it was that first of all I used the random picker once which selected a random choice of colours and I worked out that if you use that once then using probability you work out the average number of times the colour appears by having one trial session then resetting once you have your average. Using this method I managed to get up to 1000! I know that the results are not always the same but it does give you an approximate guide to work with and leave the rest to guess.

Oscar from Wilson's School thought about how many times to perform 10 random viewings, using an important idea that the more viewings we average over, the more likely we are to get the correct distribution. This is a very important concept in probability - it's worth giving it some thought if it doesn't make sense yet. A good resource for seeing this phenomenon in action is Which Spinners?

This is Oscar's work:

To reach 1000 points, you would want to view the bag as many times to get an accurate answer but spending the least amount of points at the same time.

In just one viewing, each marble has $\frac 9{10}$ [probability] of NOT being picked out.

This means, to maximise all marbles to be picked at least once, it would be best to view the bag at least three times before each guess.

If only 1 marble of a colour was in the bag, it might only be picked once out of all 30 viewings, this means it would be very low in percentage compared to other colours. However, if it was picked at least once, we know there cannot be none of that colour and should round upwards to 10%. When guessing after 3 viewings, it is best to round up or down to the closest tenth (exception for less than 10% but greater than 0% as it would have to round upwards). If there are too many for 10 marbles, the lower percentages may need to lose a marble on the guess. This has a high chance of getting at least 9 correct (100 points) which results in 70 points gained. There are chances in 10 correct (150 points) and that results in 120 points gained. However if only 8 were correct, only 30 points would be deducted. In the rare chance of less than 7 correct, 180 points will be deducted.