You can begin to explore Conway's tangles with the NRICH Problem "Twisting and Turning". The article "Symmetric Tangles" explores the symmetry of tangles. 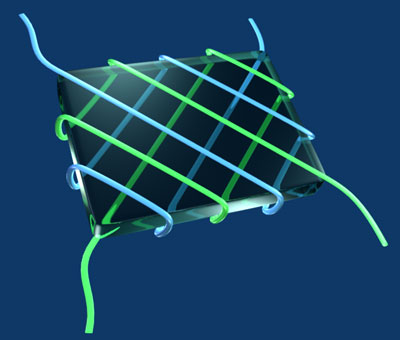 This is a personal story of discovery that began in February 2007 when a colleague of mine, Ian Short, showed me an interesting trick he'd seen in a lecture given by the mathematician John Conway in Cambridge in 1998.

At the very start of that lecture, he said this, "What I like doing is taking something that other people thought was complicated and difficult to understand, and finding a simple idea so that any fool and in this case, you can understand the complicated thing."

He's telling us there are lots of really difficult ideas out there that really aren't that difficult at all if only we can see them from a better angle. Well, after reading the lecture transcript it still took quite a long time to find the better angle to see his little rope trick, but he had captured my interest and I ended up having a lot of fun investigating it, and learnt quite a lot of mathematics on the way...