Can music-making help your pupils understand mathematical concepts such as fractions, ratios and probability? In autumn 2005, creative arts charity, Create, sent four professional musicians to maths classrooms to find out. In this article, Create's founders - Nicky Goulder and Samantha Lodge - reveal how maths books and marimbas can go hand-in-hand.


If you're a maths teacher, the thought of thirty children all playing tambourines and bongo drums may not immediately appeal, but does music-making have the potential to help your pupils understand mathematical concepts such as fractions, ratios and probability? Eager to explore this possibility, Create launched its pioneering cross-curricular maths and music project, Count the Beat, in October 2005. This involved four of Create's leading professional musicians taking music and maths workshops to 150 pupils (aged 9 to 11) at two primary schools in South East London.

The motivation behind every Create project is to give individuals a chance to be creative, develop valuable life skills (such as teamwork, listening and communication), become more confident and have fun! Since its foundation in July 2003, Create has run a great number of music projects in schools across the UK and, when you run as many music projects as Create, the parallels between maths and music are never far from your mind. Beats in a bar, for instance, translate into fractions, note lengths into ratios and symmetry is used to create harmonies and texture. The more music projects we ran, the more we thought about how we could consciously draw out these parallels and use music-making as a tool to aid teachers to communicate key mathematical principles.

We were further inspired by Dr Gordon Shaw's seminal 1999 study that identified a causal relationship between musical training and improved numerical ability. Taking place in Los Angeles, the study compared the maths test results of children who had been given piano lessons with those who had received traditional maths teaching assisted by the use of computer programs. Dr Shaw found that pupils who had piano lessons saw a significant improvement in their maths skills - particularly with regards to ratios and fractions . For Dr Shaw, this served to highlight the connection between pupils' music-making and their grasp of mathematical principles: "The learning of music emphasises thinking in space and time ... when children learn rhythm, they are learning ratios, fractions and proportion" (Dr Shaw, Neurological Research, 1999).

It was funding from Citigroup Foundation that finally allowed us to put our plans to take musicians into maths classrooms in motion and, in 2005, Count the Beat was born.


We embarked upon this project with two main aims: to help teachers deliver the Maths Curriculum in fun and imaginative ways; and to introduce children to the creative potential of maths. Our overall vision was to achieve a sense of seamless learning by bringing together supposedly separate areas of the curriculum. Activities began on 4 October 2005, when we took a team of four musicians to Key Stage 2 pupils at Lewisham Bridge School and Lucas Vale Primary School. It was a new area for us all, so we couldn't wait to see what the children and teachers would make of it!

Each session started with the class teacher delivering a brief lesson on a key mathematical principle, such as fractions, angles, ratios, measurement or probability. The rest of the session was spent bringing these principles to life through a range of creative music activities.

"Practical application of any theory is always good to reinforce an idea. Using music to teach maths is excellent both for maths and music ... the maths comes alive and the composition of music is more clearly understood." (Create musician) 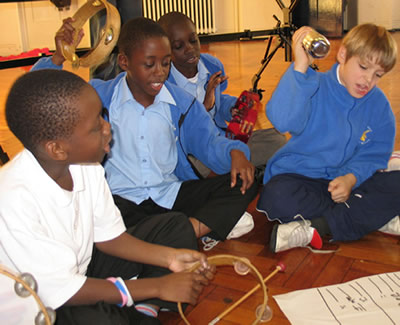 A workshop that had children transforming fractions upon a number line into a musical score was particularly effective in highlighting the connection between these two disciplines. Leading on from the teacher's lesson on fractions, the musicians asked the class to create a number line of twenty units. They then divided the class into small groups, giving each group a different instrument to play. One group, for example, had xylophones, another had African djembe drums. Each group was then given three fractions that they had to plot on a number line. Once they had completed this task, one of the musicians began to clap a steady beat and asked the first group to beat their instruments when their fraction came up. To illustrate, let's say that this group had been given the fractions $\frac{2}{10}$, $\frac{3}{4}$ and $\frac{4}{5}$. This would mean that they would hit their given instruments on the 4th, 15th and 16th beats. After each group had practised playing their fractions on their own, the musicians helped the children to bring these different rhythms together to create a class musical score. 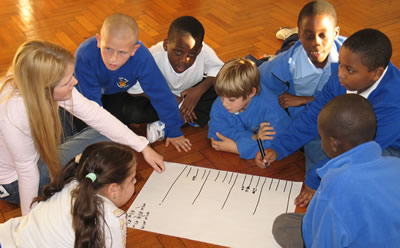 The activities that followed developed the number line/musical score link to allow children to put their own creative stamp on the music-making. Each group was given the opportunity to work alongside one of our musicians to create their own rhythms using a variety of instruments. The children then had a chance to put their knowledge of fractions to the test by mapping their own individual rhythms (each differentiated by a different colour pen) onto a group number lines which, again, acted as a musical score. As well as giving children a chance to place fractions in a temporal-spatial context, this exercise was fantastic at opening children's eyes to the creative possibility of maths. It showed how maths can be so much more than a "right" or "wrong" answer. Children who had perhaps struggled with the subject in the past were suddenly using mathematical principles to create something they were proud of, and that gave them a huge boost of confidence.

"By counting rhythm and learning the timing of beats, we have really seen an improvement in the pupils' mathematical ability ... the kids have loved this creative way of learning!" (Deputy Head of Lewisham Bridge School, Julia Holmes, speaking on behalf of the school's educators) 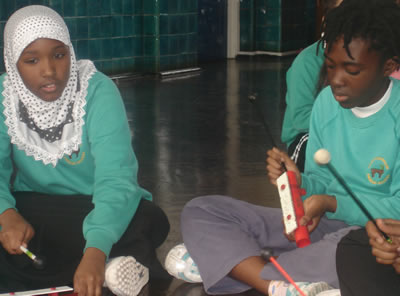 The Count the Beat activity that proved most popular with the pupils that took part was the one geared towards instilling the principles of probability. Here, the focus was less on the direct relationship between maths and music, and more on how music can provide children with fun and memorable ways of revising their maths curriculum and vocabulary.


"It makes maths more fun and easier. You're learning and you're also enjoying it!" (Year 5 pupil at Lucas Vale Primary School)


For this game, our musicians asked the participants to divide themselves into six groups, each of which was given the task of creating a probability-inspired chant (for example: "It's unlikely that Wigan will win the Premiership"). The groups then created rhythms and movements to accompany their chants. Once this had been completed, a musician stood in front of them all with a giant fluffy dice and gave them one rule: they could sing their chant as loudly as they wished, but only if the dice landed on their group's number. This exercise made the pupils subject to the laws of probability, as one group might get to chant ten times whilst another was forced into silence for the whole piece. Desperate to bring the roof down with their chant, the unfairness of probability quickly hit home!

Let's return to the question with which we began: does music-making have the potential to help your pupils understand mathematical concepts such as fractions, ratios and probability? Create's Count the Beat experience highlights two ways in which music-making can aid your pupils' understanding: firstly, it can provide a fun and imaginative way of familiarising children with maths topics and vocabulary; secondly, there are direct parallels between the skills needed to succeed in the maths and music classrooms that can be drawn out to reinforce each other. Music-making is also a brilliant means of demonstrating how mathematical principles can be applied in creative contexts and we certainly feel that our activities geared towards pupils' exploration of this were a particularly successful element of the project.

"The gains from this project have been wide reaching, from improved retention of mathematical vocabulary to increased self confidence, from a greater understanding of rhythm to a greater understanding of fractions, from an improvement in listening skills to greater knowledge of musical instruments. It is hard to separate the musical gains from the mathematical gains, but isn't that what learning should look like, seamless?" (Head of Lewisham Bridge School, Sue Sarna, and Head of Lucas Vale Primary School, Alexandra Hardy)

The first year of Count the Beat was a fantastic experience and our musicians are looking forward to building on the project's successes when we return to Lewisham Bridge and Lucas Vale schools in the autumn and spring terms of this new academic year.

If you feel inspired by this article, why don't you try out some of the Count the Beat activities described above in your own maths classroom!

Whilst a team of professional musicians and an extensive collection of percussion instruments are, of course, a big bonus, both the number line/musical score activity and the probability exercise can be adapted to your own maths classroom. Pencils can be drummed on table-tops for instance and yogurt pots can be filled with rice to make maracas.