Too Close to Call

Weekly Problem 24 - 2012
Can you put these very close fractions into order?

A Maths Focus Group from Reigate Priory School wrote up the strategy they used to complete the jigsaw:

First we found the corners, which were pretty easy as they had to have $2$ black triangles.
Then we did the edges which have $1$ black triangle but we found that we had $4$ spare, $1$ from each edge.
We realised that these probably had to go together in the middle of the jigsaw, ie: with black triangles touching.
We then worked out the 'inner' corners, ie: the squares that had to have $2$ triangles matching, and then we worked out the squares that had to join these up.
After that there was only $1$ piece left to fit in the middle!!

I looked at matching pairs first, and then tried to match them up into a group.
I then saw a pattern and worked from that to complete the jigsaw.

George and Sophie from Hoyle Court Primary in Baildon, Shipley, West Yorkshire started off finding the more obvious equivalent fractions, and formed small sections of the jig-saw. Then they realised they could start to piece sections together. Eventually they recognised the pattern of the triangles around the edge. Their solution is below. Well done to both of them. 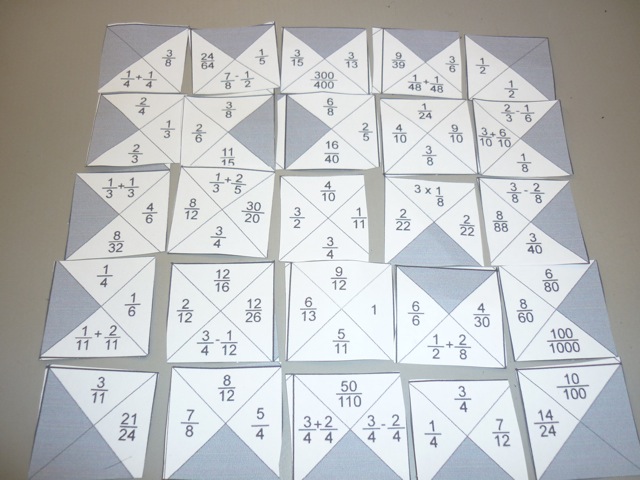