I drew this picture by drawing a line from the top right corner of a square to the midpoint of each of the opposite sides. Then I joined these two midpoints with another line.

Can you see four triangles in the square?

What fraction of the area of the square is each of these triangles?

Then I drew another picture:

How is this made using the first square?

What is the shape that has been created in the middle of this larger square?

What fraction of the total area of the large square does this shape take up?

This problem is useful for those pupils who are coming to terms with spatial representation of fractions where area is concerned rather than just length. Pupils' visualisations vary a great deal and this may prove very difficult for some and yet readily accessible to others.

You could begin by projecting the image and inviting learners to talk to their neighbour about what they see.  Facilitate a whole group discussion, which may or may not naturally consider fractions.

You can pose the question about the four triangles and give out these sheets (the first image is on the first page and the second on the second page).  Some may want to cut up the image, others may want to draw on it, others may like to fold it somehow.

The resulting discussion is a great assessment opportunity - how well are your pupils grasping the ideas surrounding area and fractions?

Tell me about your folding/cutting.
What do you think about the area/size of this shape?
What have you noticed so far?

You can open out this activity by extending thoughts and ideas.
The original triangle could be looked at and ideas for changing it explored.
So you may come up with ideas like these new ones:

These came about by making the corners of the triangles a third of the way along rather than half as in the first, original one. You could usefully ask the pupils what they notice about the four areas in each of these three examples.

Triangles can be formed in different ways of course so opening the door to ideas such as: 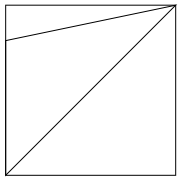 Now we have only three areas to explore, but what can the pupils say about them? [The point on the left hand side is one quarter of the way down.]

They could explore many more examples like this and compare the areas and triangles you create.

Then there is the second part of the question. Asking pupils if they could do something else with the original shape to produce a tiling effect can lead to all kinds of ideas. One that I saw was: 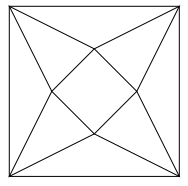 Again questions about areas can be explored.

Alternately you could present the same idea using the common A4 size of paper:

So it's really a matter of changing the original question slightly and getting the pupils to say what they see and identify ideas that could be explored.

Some pupils may need to have an adult with the to help in sustaining concentration.