An Introduction to Differentiation

This article is a gentle introduction to differentiation, a tool that we shall use to find gradients of graphs. It is intended for someone with no knowledge of calculus, so should be accessible to a keen GCSE student or a student just beginning an A-level course. There are a few exercises. Where you need the answer for later parts of the article, solutions are provided, but you are strongly encouraged to try the questions as you go: none of them is particularly hard, and you will get a much better idea of what is going on if you try things out for yourself. Use the solutions to check your answers, rather than to avoid doing the questions!


To work out how fast someone has travelled, knowing how far they went and how long it took them, we work out $$ \textrm{speed} = \frac{\textrm{distance}}{\textrm{time}}. $$ On a distance-time graph, this is equivalent to working out the gradient.

Note that a straight line has the same gradient all the way along, whereas a curve has a varying gradient; we find the gradient at some specified point.

But actually trying to draw this tangent is both fiddly and inaccurate. What would be really useful would be a more precise way of working out the gradient of a curve at a particular point. We have such a formula when the curve is a straight line: you may be used to the expression "(change in $y$)/(change in $x$)". But to do something similar for a curve, we're going to need differentiation .

For example, suppose I had chords that got closer and closer to the tangent, and their gradients were 1, $\frac{1}{2}$, $\frac{1}{4}$, $\frac{1}{8}$, $\frac{1}{16}$, $\ldots$. Do you see that these are getting closer and closer to $0$, and no matter how close I want to get, I can find a chord with a gradient that close? I'm deliberately being a little bit vague here, because making this rigorous is quite hard (it comes up in the first year of most university maths courses), but as long as you get the general idea of what "tends to a limit" means, that's fine for now. Ok, so we've got the general principle. But can we actually use it? Let's have a go with a fairly nice curve: $y=x^2$.

(i) Sketch the curve $y=x^2$ - you'll need a nice, large graph for the next part, so fill the piece of paper! You could find several points on the curve and join them with a nice smooth curve, or perhaps you could use a graphic calculator or graphing software on a computer (but you'll need a printout for part (ii)).

(ii) Try to work out the gradient at some points, by drawing tangents on your graph as well as you can. Try several different points, and see whether you can spot a pattern. 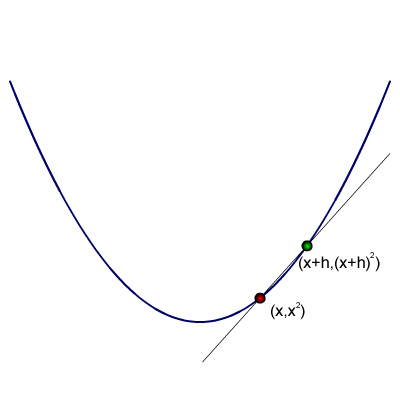 How does this answer compare with your experimentation in Exercise 1?

By multiplying out the brackets (or using the Binomial Theorem, if you know about this), work out $(x+h)^3$.

Compare this answer with your experimentation in Exercise 3.

Fill in the answers you've got so far. Can you spot a pattern? Can you guess what the gradient's going to be for $y=x^n$?

Work out the gradients of

This technique we've developed to find the gradient of a curve is called differentiation . Hopefully you now understand how to differentiate any polynomial. You don't have to do it from first principles each time: once we've proved the basic results, we can just quote the fact that $a x^n$ differentiates to $n a x^{n-1}$ and so on. It's possible to differentiate other curves too; for example, we could find the gradient of the curves $y=\frac{1}{x^n}$ (maybe you've already guessed how to do this), $y=\sin x$, or $y=2^x$. However, these require a little bit more technical machinery, so we'll leave them for now.

As a quick aside, let's very briefly mention integration , as it's the 'other' part of calculus that comes up at A-level, although we shan't go into any details here. Let's imagine a slightly different scenario: here, we know how fast someone travelled, and how long for, and want to work out how far they went. This time we use $$ \textrm{distance} = \textrm{speed}\times\textrm{time} $$ (just rearranging the formula from above). This time, we could use a speed-time graph and work out the area under the graph to find the distance. If the lines surrounding the region are all straight, then this isn't too hard - you've probably done questions like this that involve you having to find the areas of triangles, rectangles and trapezia.

But what if the line is curved? You might have come across the idea of approximating the area by roughly splitting it into triangles, rectangles, and trapezia,

but this effectively means pretending that the curve is made up of several straight sections, and this is never going to be precise. We can use integration to find the area under the curve without this approximation.

I've said that we use differentiation to find speed on a distance-time graph, and integration on a speed-time graph. This sort of suggests that they're related - a little bit like the link between addition and subtraction, where we can use one to "undo" the other. There is a theorem called the Fundamental Theorem of Calculus (sounds impressive, doesn't it?!) that explains this relationship more precisely, and that's why I wanted to mention integration briefly too.

Differentiation (and calculus more generally) is a very important part of mathematics, and comes up in all sorts of places, not only in mathematics but also in physics (and the other sciences), engineering, economics, $\ldots$ The list goes on!