A small circle fits between two touching circles so that all three circles touch each other and have a common tangent? What is the exact radius of the smallest circle?

The first part requires only some very elementary geometry and knowledge of how to work out the area of circles and triangles. The solution given here uses calculus for finding the volume in the second part. If you can find this volume without calculus we'll be pleased to publish your method. 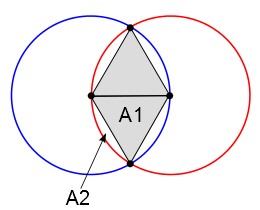 There are 4 of these extra regions, so our total area of the region in $2D$ is

The volume of the intersection of the spheres is double the volume of revolution formed when this arc is rotated through 360 degrees about the $x$ axis.